Sunathon - A Lesson About Circumcision

When was my last post again? About a month ago wow so berhabuk! Before that, my deepest sympathy goes out to all flood victims out there especially in Kelantan, Terengganu, Perlis, Kedah, Perak and Pahang. May Allah comfort you and your family in this time of grief. Stay strong!

And for those who aren't affected by flood, don't take this time as an opportunity to be "famous" in social media and this matter should not be politicised. Why don't we, hand-to-hand, together helping them as much as we could do. At least, pray for their safety and welfare.

Alright now let's move on to our main topic for today. Sunathon is basically a combination of Sunat (Circumcision) and Marathon or in other words, mass circumcision. IMU doesn't provide this kind of training so about 20+ of us (under IMU Muslim Society) paid a few amount and went to Cyberjaya University College of Medical Sciences last week to learn everything about circumcision. This may be very useful in the future.

After we had breakfast, we were given few lectures on different topics about circumcision; General idea, Management of the program (If you wanna conduct Sunathon at your place), Procedure, Equipments, Sterilisation, Post Operation and Overall Flow.

SECOND STEP
Give the patient Local Anaesthesia (LA) which consists 2ml of Lignocaine (short-acting LA) and 2ml of Marcaine (long-acting LA).
There are 3 places that have to be injected.

THIRD STEP
Clean and drape.
Clean the area and make a hole in the drape (which is given along in the dressing kit).

Smegma is actually a buildup of exfoliated (shed) epithelial cells, transudated skin oils, and moisture found between the foreskin and penis. When the head of the penis isn't regularly cleaned, this fluid accumulate and expel an unpleasent odor.

So to those yang dah bersunat, tiada lagi accumulation of spegma ni :)

We also had a session, explaining about the equipments and sterilisation process.
Apparatus and equipments that will be used were; artery forceps, needle holder, forceps (either with or without tooth), scissors, catgut, syringe, disposable gloves, saline, dressing set and Chloramphenicol (CMC).

Then we had a practical session with few stations! Weeeee

First station; Local Anaesthesia
We learned how to draw Lignocaine and Marcaine from their bottles.
We had to perform Intramuscular (IM) and Subcutaneous (SC) injections on a half-cut orange.
It was quite hard actually to perform it below than 1 minute!
And we had to make sure there's no bubble inside the syringe because it can cause air embolism.

Second station; Clean and Drape
We were required to clean a so-called penis (bottle) using alcohol and then drape it with a newspaper.
This station was quite easy to be finished in less than a minute hehe.

Third station; Suture
At this station, we were being taught on how to suture a cloth.
We had to do 5 sutures in less than 5 minutes.
I always wonder whenever I look at doctor performs surgery, how can they suture very well!
Now I know.
If you know the technique, suturing is reallyyyy easy!
Fyi, you can look like a pro too ;) heee.

Fourth station; Dorsal slit and Suture
With a partner, we had to perform dorsal slit on a tyre and then suture it back!
Cutting (Dorsal slit) was quite easy but to suture it back is not that easy because the tyre was quite thick and the catgut wasn't easy to penetrate it.
We sutured the tyre by using the interrupted 6 sutures that had been taught.
It is called interrupted because 6 sutures are sewn separately, so that if one is accidentally opened or if an infection occurs at only one part, we don't have to open all the other sutures.

In the evening we had an exam for all stations and some written questions.
My best friend Diddy who studies in CUCMS spent some time, visiting Tiara and I weeee.

We went back to IMU by the same bus.
Unfortunately the bus couldn't go into Bukit Jalil area bcs at that time ada perlawanan akhir Piala Suzuki between Malaysia and Thailand in the Bukit Jalil National Stadium.
So we had to walk all the way from the highway to Vista haha.

Lbnl, tbh everything was great!
Time and money spent on this program were really worth it.
For those who plan to know about Sunathon and experience this by yourself, just give a call to CUCMS. 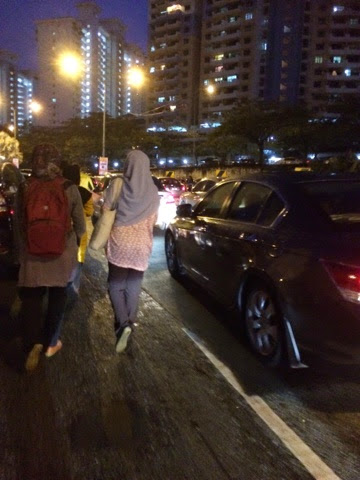