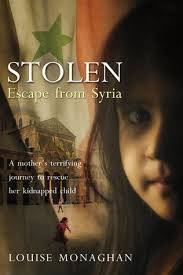 A little bit of synopsis here; An Irish woman (Louise) married to a Syrian guy (Mostafa) and had a child with him named May. Together they stayed in Cyprus. She was being abused by her ex husband, but despite everything that had happened, he kept returning back to him. One day the guy abducted his own daughter and brought May to Syria. Louise entered Syria in order to be with her child and tried to bring her out of that war-zone country and with the help of many people along the way, they managed to escape and back to Cyprus again.

I felt really sorry for her at the beginning of the story when her ex husband abducted May and she had to figure out ways to rescue her. I know I'd never understand what a mother would do for the sake of her child as I'm not yet married and my ibu always tells me, "Bila awak dah kahwin, dah ada anak, baru awak faham." But as the story went, I became really frustrated by what happened and how bias a person can be. It wasn't my interest in that book that drove me to keep reading it, but because I would like to know how was her daughter, and whether she'd see any good in the other side (in this case: Islam). Here are some critical points that I would like to point out from this book, which is supposed to become a heroic story, but to me.. it is not a really good example.

1.   Staying with an abusive married guy.
Since at the beginning she already knew how abusive Mostafa was, even before they got married when she was pregnant, carrying their first child, May. She stayed with that guy despite of everything he had done to her. He had repeatedly beaten her up dreadfully, but she continued going back to him, used many excuses to stay by his side and telling herself that everything might be okay, which in return, what she expected was never happened. Mostafa became more violent, and every time something wrong happened; (Louise knew Mostafa slept with other girls, Mostafa had a wife and 2 kids in Syria), when Mostafa insisted that he wasn't wrong, he lied to Louise telling her she got a fake story blah-blah, but still, Louise didn't leave him. She stayed with him, although she had to pay all the rents and bills, which I cannot brain. Some of the reasons were because she loves Cyprus (she couldn't run away from Mostafa as he lived in Cyprus too) and Mostafa is handsome(?). Invalid and unreasonable reasons I must say.

2.   Insensitive and judgmental
The writer of this book definitely didn't know anything about Islam at all before she met Mostafa, and she judged Islam mostly based on her experiences with this guy who was clearly only a Muslim by his name. Here are some parts quoted from the book that I felt quite offended when reading them;

"He enjoys drinking alcohol, not visiting mosques or praying every few hours on a prayer mat. To me he was born Muslim, but was not practising, and he was definitely not one of these extremist Muslims. I had nothing to fear."

"We go to Mass and tell a priest our sins through choice, but with Islam, there are set times to pray and Muslims must pray at those times. In Idlib (an area in Syria), the calls to prayer went on for about 15 minutes each time, and whenever they started (the Azan), I yearned more and more for home."

"I hated Syria, its religious beliefs ..."

"Was their religion so powerful that they could refuse what most other countries would see as a basic human right ..."

"As I entered her home, I went to take my shoes off, and she said, "What are you doing, love? There are no Muslims here. We are Christians." I think it was then that I knew were truly safe."

So you're telling your readers that those Muslims who don't drink alcohol and pray on the prayer mat every few hours are the extremist Muslims? Not sure where did you get this idea from, because as far as I know, the real Muslims who don't drink alcohol, visit mosque for each prayer time are usually the good Muslims, those who are less likely would beat their wives, neglect their responsibilities and have a social lifestyle, hanging out with all girls in pubs and bars. Not all, but mostly.

You compared Islam to your religion, which bias was obviously shown. Do you know why we pray 5 times per day instead of whenever we want to? Do you know why there's prayer call every time we are supposed to pray? You didn't know, you never discovered about it, yet, you criticised without knowing the reasons behind them. For those who don't know about Islam just like you will definitely have their minds carried away by your condemnatory and disapproving words towards Islam in your writing before knowing how the real Islam looks and feels like. I can't really blame you as you were quite unfortunate for meeting the wrong Muslim guy, but just a piece of thought, if we close our heart towards good things one might give, we would only see the bad things. Islam is a perfect religion, but not the people. It is really unfair to judge the whole religion from a person or speculation you are known from an unreliable source. Her poor understanding of Islam and Syrian cultures makes the border of the prejudice.

3.   Redundancy
Louise's bravery in entering a war-zone to save her daughter is undeniable, but I bet every mother would do the same thing. I just asked my mother about that. She said even if it would cost her life, she'd do it, just to rescue me out from the dangerous place. I just can't accept that despite of everything she had gone through, she kept going back to that guy, refusing to move out of Cyprus, just because she loved Cyprus and ignored all the consequences both of her and her only daughter, May had to face. In the book itself, she kept telling how cruel was her ex-husband, how she couldn't stand with his behaviour, but ended up back to him, and this thing had been written over and over again until it became a redundant, which made me wanted to stop reading the book, and in my mind I reckon May was way much cleverer than Louise back then.

I just wanna express my unsatisfied feelings towards Mostafa, who shouldn't bother Louise's and May's lives as he was such a guy who deserved to be called neither husband nor father and though the domestic violence occurred every day in Louise's life, she never learnt her lesson.

4.   Selfish
As heroic as she might sound, which in fact is quite true, but then she was the one who put her daughter and herself in this situation. She was the one who didn't wanna leave Cyprus and every time she did that, I always wonder why was it so hard for her to leave Cyprus and back to her hometown in Ireland. Her reasons weren't solid and concrete enough to make readers not to question her acts and decisions, for staying in Cyprus, near a guy who she really disliked and at any time can abduct and bring May to other places, and at the worst case like the true incident, to a war zone country, Syria.

Her family, especially her sister and dad were very worried about her, and to me it was a selfish attitude and immature decision to not go back to Ireland, where safety will definitely be taken care of and she wouldn't have to be afraid of Mostafa every time he visited May and took her out for a walk during the visiting day. There was a time when she told readers she wore Western clothes and with her blonde hair, going from one place to another place in Syria, while rescuing her daughter, May. I am truly aware of how strict Syria is with the guarded checkpoints, checking for protestors and to look like a Western woman in the midst of everything might increase the risk of being caught and mistaken as protestors, which not only will put her life in danger, but also her daughter.

5.   Returned back to the old place
One thing that makes me can't brain at all is the fact that she told everyone in the book that she is now returning back to Cyprus and I don't get the logic of staying back at the place where your daughter got abducted from. And the fact that she doesn't know where Mostafa is now worsening my disbelief towards her actions.

Anyway, after what had happened to her, I'm really grateful and feeling glad that May is out from Syria and already back to her mother.

This is such a long review. Sorry if I said (read: typed) anything wrong!