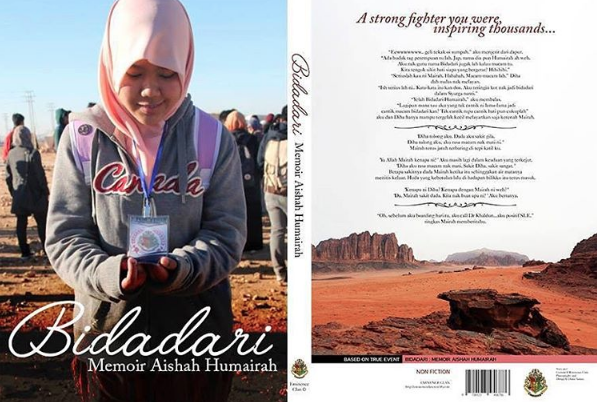 I've never known her in person, nor what she studied or where she lived. But one thing I know, she was a fighter. She passed away a few months ago due to SLE, but that doesn't indicate she lost to SLE. Let me tell you why.

SLE stands for systemic lupus erythematosus or in a simpler layman's term, it means body immune system attacks healthy tissue. And because it's a systemic disease (affects whole body, does not focus on any particular area), it might attack any parts of body including skin, muscles, blood, heart, lungs, stomach, kidney etc. All these manifestations attack at the same time in a serious condition. It seemed impossible for one to endure such pain, but that was what she did.

This book is compiled by her friends from the experiences they had with her; the ups and downs, the happiness and sadness. I really salute her friends who were always there for her, despite having to focus on their studies as well. The journey she had to go through was unbelievable and unbearable. I don't know whether I would be as strong as her if I were in her shoes.

This book touched the soft spot in my heart and some of the stories, even made my eyes watery. The disease progressed slowly, attacking one by one. After she had recovered from one thing, she was attacked by another thing. Every time she fell, she stood up, telling herself, "I can do this". It happened over and over again. She fought every single day, in fact, every single second towards the end of her life.

One more thing that I really looked up to is her connection with Allah SWT. She remained positive and patient most of the times. Yes, sometimes she did tell people and complained of her pain, but we are not in her shoes, so we don't know how much pain she had to bear. I admire her strength, not only physically, but also mentally and spiritually.

She is indeed a bidadari.
Her name is Aishah Humairah.

May Allah grant her Jannah. Al-Fatihah.

P/s: This book is given by a friend of mine, who studies in Jordan. It is really a good book. Even my mother and sister said so. They published 450 books as a trial for Jordan University Science & Technology (JUST) students, but had already sold out. They plan to come out with a second batch, but is still under consideration.