Birthday Surprise - A Success Or A Failure? 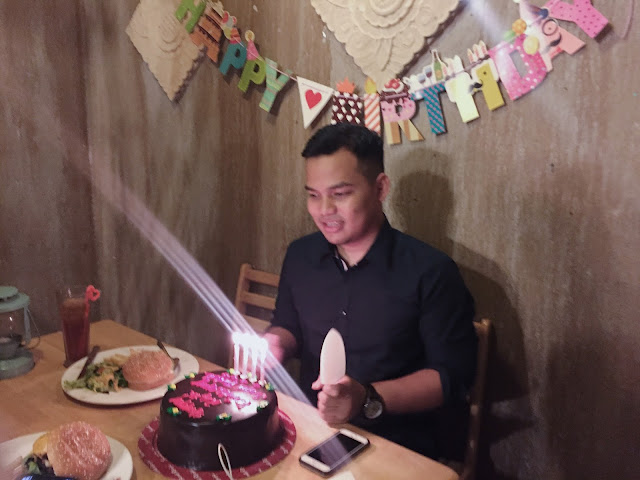 I couldn't read his face. Did he feel surprised? Or not? It could be either way. But I just couldn't tell it. Then I decided to ask him directly.

Yesterday was Sobri's 24th birthday and after so many years of LDR and facetime wishes, I wanted to make this year a different one for him ceh konon. He's working in JB and for the current posting, he has to work even on the weekends. I planned to make a surprise, and was it a success? Or a failure? Jeng jeng jeng.


On the 10th of April, I contacted one of his friends who works and stays in JB, Ily. She's one of his group of friends who he often hangs out together. I consider myself and Ily as acquaintances as we follow each other on Instagram, know each other presence, but never met in person. Ily was willing to help me, and another great thing was another friend of Sobri, Feeda agreed to join as well weee the more the merrier.

I already booked a bus ticket to and fro Melaka-JB one day earlier, so that everything would run smoothly. In the morning, I quickly went to buy presents for Sobri. It was kinda last minute, but luckily I managed to. Then around 12.30, my mother sent me to Melaka Sentral, I boarded the bus and the bus left sharp at 1pm. ETA showed 2 and half hours, but little did I know that it takes 1 hour longer by bus as the bus did stop for about 30mins if I'm not mistaken and the road was a bit jammed. I reached Larkin Sentral at 4.30pm.

Ily fetched me from Larkin Sentral and we went to a nearby Secret Recipe to buy a cake. There was not much choice left for me to choose from. I saw my favourite White Chocolate Macadamia, so I told the lady at the counter. At the same time, a pakcik told another lady that he wanted that cake. It was the last White Choc Macadamia cake left in the fridge. Of course, I was not going to fight with the uncle for the cake, so I decided to choose a different one. Moral of the story here: Secret Recipe should provide more cakes haha kidding.

We left Secret Recipe and Ily drove straight to The Cave Cafe. A funny thing happened. Ily parked near the back door of the restaurant. We entered the door, which at first lead us to the toilet before reaching the main area. We were finding a suitable place to sit, and for me to hide before we realised that we entered the wrong restaurant haha. Imagine if we waited for Sobri there, and Sobri waited for us next door haha.

The Cave has a rocky entrance, which will make you feel like entering a cave. There are outdoor and indoor areas, and we chose the indoor one hm cs how can you sit in outdoor if you're in a cave, right? Make sense? Hehe. Ily already told Sobri that a few of them wanted to celebrate his birthday and asked him to come to The Cave. A table of 4 was chosen and I went to find a strategic place to hide. I called Sobri and asked where was he going. I made sure we called until he reached that place. I was brilliant, I know. I wish I am this brilliant in Medicine haha. Sobri being Sobri. He didn't ask much when he noticed there were only 4 chairs, making things easier for me haha. Ily and Feeda were so good at helping me by making it looked less obvious. A waiter helped me to prepare the candles on the cake and I brought in the cake. Sobri sat facing the wall, so he did not notice me from behind.

And when I reached, the first thing that he said was, "Eh, eh." He went speechless for awhile and I think I noticed his eyes were a bit watery, but his eyes are always watery though so nahh, pass haha. He cut the cake, we took some photos and the 4 of us had a dinner together. It was a success, yeay! 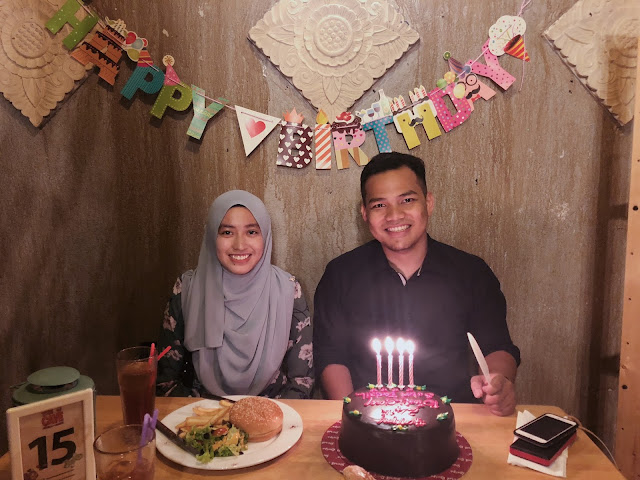 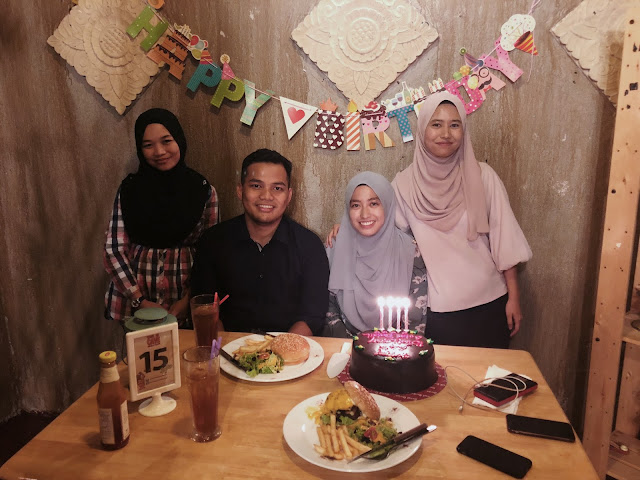 A big thanks to Ily and Feeda for making it a success! And I have new friends weeeeee.

Sobri sent me to Larkin Sentral that night as my bus would depart at 9pm. I asked him whether he was surprised or not and he told me that he was really surprised and never thought anyone would make a surprise birthday celebration for him. He also mentioned that at first he did not recognise me and he thought 'awek mana entah' (amboi) because I look thinner(?) Was it because I really look thinner compared to before, which I don't think losing 2kg can make me suddenly look very thin or was he just being sarcastic? Haha cis. It was a long day, but I'm really glad it went well :)