I just ended my 3-day-clinical rotation and came back from Jempol the day before yesterday. Previously, IMU would send all semester 3 medical students to Hospital Kuala Kubu Baru for the clinical rotation, but this time they added one more hospital, making it becomes 2 and we are divided into 2 hospitals; half of the students go to KKB and the other half to Jempol. My group (E5) became the first group from the first batch being sent to Jempol.

This Jempol posting was one thing that I really looked forward other than the elective posting, which starts next week, but the past experiences told by seniors and not-so-nice stories about KKB accommodations made me a lil bit nervous and I expected to stay in Jempol would be more or less the same, or maybe way far worse than KKB. A place with bunk beds, no bed sheet and pillowcase, no iron, lack of this and that, it's gonna be hard, but don't worry, we're gonna survive! The bus was gonna leave at 3pm and I started packing at 1.30 in the afternoon. Tiara arrived at Vista around 1pm and we packed our things together, trying to make sure everything important is inside and discard all the unnecessary things, which would only make bag becomes heavier, but useless. After everything was ready, we walked to the IMU bus stop, which is only about 5 mins away and boarded into the bus that had arrived earlier than us. There were 30 people in the bus included the bus driver and we left IMU at 3.10pm.


After 1 hour+ of the journey, the driver asked us whether there's anyone among us who knows how to go there and the worst case was, we just knew that we headed to Jelebu instead of Jempol because the driver thought we were going there. With terrible phone connection, diminished mobile data and not functioning Waze, we tried our best to find the way to Jempol and by the time Waze could be used, the driver refused as he knew how to get us there by using the main highway and road, instead of following the Waze, which tends to lead us to a short-and-well-trodden-but-got-worse-the-further-we-drive roadway.


Upon arrival in Jempol, we had to find the location of the homestay we would be staying for these 2 nights. We stopped in front of a school, while my group mates tried to ask our doctor and the local people who live there. Eventually we found out we had been in the wrong residential area. It was supposed to be Taman Serting Perdana, not Taman Serting Indah. As we arrived in front of the first house with luggages and bags, where the owner waited for us, he told us there were 3 houses for us and each house would consist of 10 people. He asked Tiara and I how many Muslims were there and we answered 5 (Me, Tiara, Sarah, Fatin and Eema). He told us that this first house was for the 5 Muslims plus another 5 students, which at the end were Sinead, Alex, Shuru, Deviyah and Anna. I think he wanted Muslims to be in that house because the 'Qiblah' sign is already there, so it's easier for us to pray.

How was the house?

I'm really glad I had the chance to be the first group to Jempol, but I'm not saying that I'm happy not to be in KKB because I myself have never gone there, so who am I to judge, right? Both of them have pros and cons. Accommodation in Jempol is better, but Jempol Hospital is a new built hospital, so there are more cases in KKB if compared to Jempol (I guess). Anyway, back to our topic, the house was way way way better than our expectations, really. A single storey house with 4 air-conditioned rooms (but we only used 3), wifi, a fridge, TV & Astro, cups, mugs, basic stuff such as towels, soap, etc. Our house has wifi maybe because it's next door to the owner's house, which has the wifi modem. (I tried to reset the wifi modem, but couldn't find it in our house haha). 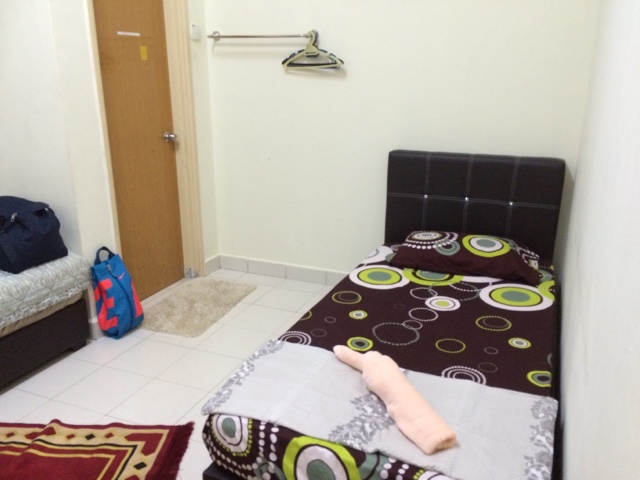 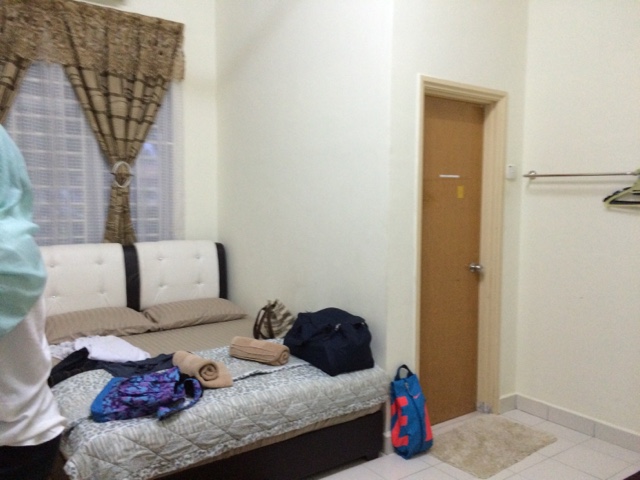 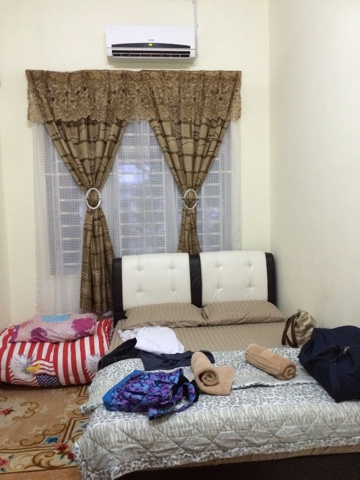 After performing Asar prayer, we went out for dinner to a nearby restaurant on foot. Jempol is about 130km from KL, so we were allowed to perform Jama' Qasar here. We sat together, all 29 of us on a long table. I ordered Nasi Goreng Paprik and a glass of iced lime water. While waiting for the food, some of us went to a nearby 7-Eleven and bought some junk food and 2 large mineral water bottles for our house. I was frigging hungry as I hadn't eaten anything since morning, just a packet of Lexus biscuits and luckily the food was served hot and nice! After eating, we walked back to our house, took a bath and that night we spent our time together, playing congkak and charade.

As it was almost 12, we decided to sleep or else we might have trouble waking up tomorrow. Tiara, Sarah, Eema and I slept in the master bedroom with Tiara and me on the Queen-sized bed, Eema on the single bed and Sarah on a comfy mattress, which she herself had chosen earlier. I set the alarm clock, got into the bed, trying to sleep and finally managed to doze off after 1 hour staring at the dark ceiling.