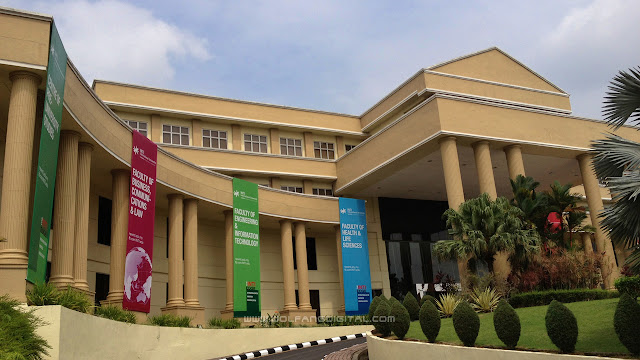 I checked my ask.fm account and found a question from someone regarding my life as a student in INTI. I never posted anything about INTI in my blog because this new blog of mine was created just after I left INTI, when I already completed my A-Level there. INTI has a few campuses in Malaysia and mine was the main campus, which is located in Nilai, far away from the hectic busy city life. To tell everything in one single post is not enough of course, but I'll try my best to make it simple and I'd make this post more organised and structured by categorising them into different signposts.

STUDY
During my time, there was no 2-year-A-Level programme, so I took the 1.5 years, 6 months shorter than most of my friends. The schedule was quite packed with most days we had classes, 2 hours each, from 8am to 4pm and sometimes even until 6pm. If suddenly the class ended in the afternoon, memang terus keluar berjimba sekejap haha. A-Level is not the only pre-university programme in INTI; there are a few more, including ADP (American Degree Program), foundation, etc. My batch, which was the July intake consisted of about 70+ people, with only 30+ students per class.

Most of my class started as early as 8 and there were times I was running late, well, you can't expect to arrive there at 8am when from hostel to school is a 15-minute walk and you woke up at 7.45 am, right? Haha. Coincidentally, as INTI is quite far from restaurants and shops, and we were too lazy to wait for the bus or take a cab, so I brought my car. When my friends and I were too lazy to walk, we went to class by car haha so pemalas I know, but jimat masa hehe alasan.

ACCOMODATION
Hostels are inside INTI area and it's guarded, but there's no curfew, so no need to rush as there's no such thing as running back late to the hostel. My memory of INTI especially those which aren't significant to me start to diminish bit by bit, nevertheless, if I'm not wrong, there are 19 blocks from A-S, with A is the nearest from school and S is the furthest.

What's the difference between those blocks?
The price, of course.

Starting from block H to S, there's no much difference in price. It's just that some of the blocks are for boys, and half of them are for girls. With a guard taking care of each block, boys can't go to girls' blocks and vice versa, that's a good thing about it. But a bit menyirap when even kitorang yang duduk dah lama pun kena tunjuk the sticker behind our student ID as it indicated which blocks were we belong to haha. I was being placed in Block R, together with my friends, Nani, Mirash and Ami. My circle of friends back then was quite small with only 5-6 people whom I really close to, until now.

FACILITIES
INTI Nilai is quite large, considering there are hostels, swimming pool, cafeteria, gym, bookshop, a large room with transparent glass to play pool, etc. Thursday is the special day for girls to use the swimming pool, but bear in mind, the trees by the sidewalk where people travel to and fro everyday aren't enough to cover the open-air-outdoor swimming pool, so for Muslims still have to wear proper and covered swimming attire, of course.

INTI IU is not fully air-conditioned like IMU. The good thing about it is, if you felt really cold in the class, just ask permission from the lecturer to have a toilet break, step outside of the class for awhile and catch a natural fresh wind or even to get the warmness from the sunlight. Never thought of it before, only started to appreciate the not-fully-air-conditioned university after entering IMU. Imagine it's raining outside and you just come out from a really cold classroom, which more or less makes you feel like being in a freezer, and then you have to face a colder surrounding outside as the entire building is fully air-conditioned. *shivering*

There are a number of parking lots, either in the hostel or in the campus, so you don't have to really worry, but it's advisable to go out early (if you wanna bring your car to class) because usually, it'll start to become packed by 10 o'clock.

EATING PLACE
Not really sure how the latest INTI looks like, but 3 years ago, there were 3 places that we usually had either breakfast or lunch at; a stall near the library, which served delicious waffles only for RM2.20 each, a cafe where you can listen to Lite FM while enjoying your meal and a row of stalls in the midway between hostel and school, where there were a Malay stall, a mamak stall, a burger-and-small-pizza stall, a chicken-chop-sausage-fries stall, etc.

I never tried other stalls than I stated above. Although all of the stalls should only serve halal food, but I was a little doubtful about the chicken and meat used in terms of halal and non-halal. All of the restaurants and stalls in INTI were opened only until the evening, so for dinner we had to travel outside of the campus to find food.

Before I had my car, the usual places that we went were just about 10 minutes walk from INTI. Kena jalan jauh sikit and turun bukit, you'd find 2 rows of shop lots, where restaurants and kedai mamak(s) can be found. After I brought my car, we either went to Giant or other restaurants to have our dinner, and sometimes, supper. Tengah tengah study lapar, start kereta terus chow singgah memana beli food haha.

TRANSPORTATION
To have a car is not really necessary as there's a so-called shutter bus, which will stop at different destinations and follow the same route every day, and it's free for INTIans, if I'm not mistaken. You just have to wait for the bus at the bus stop, at the scheduled time.

There's even a taxi booth just in front of the hostel's guard house where you can take a taxi from. Usually from INTI to Giant will cost you for about RM5, eh ke RM10 eh. Find some friends and share a taxi, jimat!

I guess that's all for now. If you have any other questions, just drop it in the comment box below :)