I feel that my few previous posts are a bit hambar because there's no photo at all.  So I thought this time maybe I should at least include one. So taraaa! 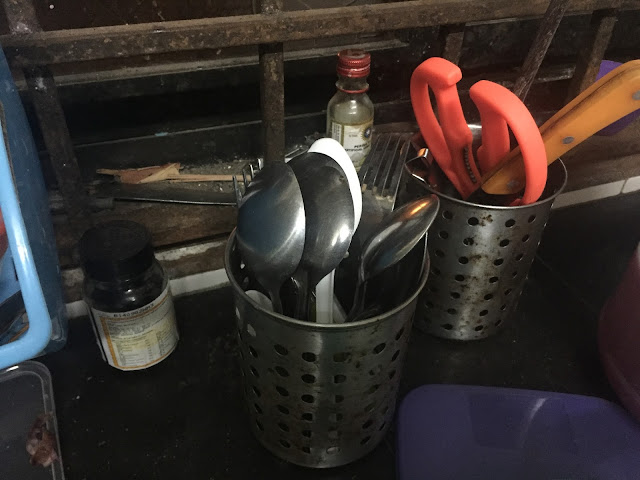 These are nenek's by the way as I'm currently at nenek's house. I know moms like to count Tupperware(s), even my ibu is not excluded among those moms of course. She is an amazing mom. She can do everything at one time, such a great multitasker. Hands down.

She knows where things are, and surprisingly even the missing ones.

Talking about missing items, of course ibu will know where her things go missing, especially her Tupperware(s). But, it looks like my ibu has developed a new habit, which is counting spoons and a new skill, finding spoons.

Ibu allocates 10 spoons for the 5 of us, not including the ones that ibu hides in the cabinet. Shh, don't tell ibu that I know this, she might change the hiding place haha. How does ibu get the idea to count spoons? Blame my youngest and the only brother, Aiman.

Last time when spoons were never been counted, ibu put all the spoons we had at one place. Day by day, without we even noticed it, we fought for it. Ibu decided to 'investigate' where her spoons had gone MIA. One day, she found out that Aiman was the culprit. It turned out that once in awhile, when he forgot that the spoon didn't come together with the food, he would simply throw the spoon as well. Ever since then, ibu started counting spoons. Worry not, she only counts once every a few weeks haha.

But still.. when one of her spoons is not there..

Ibu knows about this blog post by the way. You know what she replied when I told her?