Before you think of throwing your iPhone / iPad / MacBook because something goes wrong, try reading some of the tips regarding minor problems in Apple products here!

IPHONE / IPAD HANGS OR 'FREEZES' / TURNS OFF SUDDENLY & BECOMES HOT
Sometimes when an iPhone hangs or turns off suddenly, you can't even switch on it using the normal way (pressing the power button). So in other word if your iPhone doesn't turn or respond, then try this alternative way.
1.  Press both home and power buttons together for a few seconds until the iPhone/iPad starts and the apple logo appears.

If the iPhone/iPad turns off and becomes very hot, let it to cool down first before using it. One of the cases it might become too hot suddenly is because it hasn't been switched off for quite a long time.

APPS ALWAYS CRASH
Some of the applications may crash while you're using it so one way to solve it is; try to go to the app store and look if there's any update for the apps. Maybe the 'bug' is eating the apple! Haha

IF THERE'S NO SOUND / THE SPEAKER IS NOT WORKING
There was one time I thought my iPhone speaker had gone crazy. My phone wasn't on silent mode and I already increased it to the maximum volume by using the side volume button, but the sound came out from it was still slow.
1.  Make sure the ring/silent switch at the side is set to ring (like the photo below). 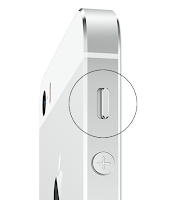 2.  Go to SETTINGS > SOUND and move the Ringer and Alerts slider to increase the volume.
3.  Voila!

MACBOOK WON'T TURN ON, CHARGER BLINKING ORANGE
A few days ago, my MacBook Pro suddenly turned off while I was using it. I thought the battery finished so I connected my laptop to the charger to charge it and while it was charging, I pressed the power button but nothing happened. I looked at the charger and the light was blinking orange. The same thing happened before and I had to leave my laptop for a day at the Mac City but this time I was too lazy so I tried to search for the solution by browsing through a few websites. Too complicated, so I ended up searching in YouTube. I found a video, which showed how to open the back of the MacBook and take-out-and-put-in-back a small black box to switch back on the laptop. I took a knife, unscrewed the screws, just like how the guy showed in the video. Unfortunately the last screw couldn't come out so I had to screw back everything. Then on the next day I brought my Mac to the Mac City and directly went to the service centre.

A lady on the counter showed me how to easily reset the MacBook. So here are the steps;
1.  Press the power button for about 20 seconds.
2.  Then press Command-Option-P-R keys at the same time and wait until the laptop restarts.

If what I told you doesn't work out, then bring your gadget to the nearest Apple Store. Alright, that's all for now.

Have a nice day and assalamualaikum!