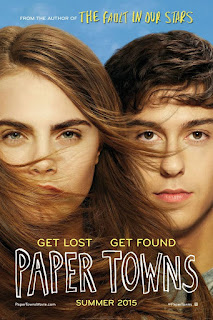 I ain't a pro when it comes to giving a review on movies and dramas as I myself usually only watch them when someone recommends but I'll give it a try anyway. Since the day they announced the released date of Paper Towns in Malaysia I already started counting down. I didn't wanna risk my exam as the movie had been aired a week before my OBA and OSPE exams so I waited until yesterday to watch it with my best friend, Ummi. At least bila dah habis exam baru rasa tenang and lega nak tengok movie haha.

The first movie that we watched was Paper Towns. The movie started with young Quentin and Margo became friends and one day they found a dead man in his 50s lying against a tree and holding a gun. Quentin or his nickname, Q, just like a normal kid, suggested to leave the dead body, but Margo took it seriously and she even tried finding clues on how the guy died. Ever since then, day by day, they started to make their own ways, although Quentin really loves Margo.

Wait I'm not supposed to spoil the movie -.- haha okay so lets jump to the review!

For Paper Towns if I haven't read the book yet then maybe I would say this is one of the worst movies I'd ever watched (I'm not a movie person so yeah) haha kidding I'm a fan of John Green, so nayy I would still love this movie no matter what others say. The ending is somehow more or less about the same as 500 Days of Summer, where the hero and the heroine didn't end their lives together. The storyline was quite slow, a bit interesting on part when Q joined Margo to accomplish 9 missions on the same night. There wasn't really much happened when they were on their journey to find Margo and the ending was quite flat(?). The movie was being adapted from the book so yeah, that's how the ending should be.

Cara was really suited for Margo's characters and her face somehow really showed how mysterious Margo is and she is the reason why I really eager to watch this movie.

The next movie is Ant-Man! 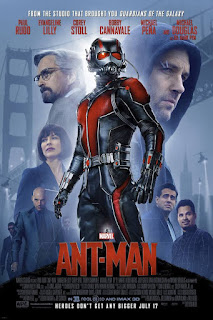 I don't really favour Marvel's movies (Iron Man, Captain America, etc) but this one is an exceptional. I really intrigued on how the ant-man tried to control his power and communicate with all the ants-- told them to put some sugar into a cup of tea, to move a coin and more tasks that harder than those! This movie somehow reminds me a bit of Physics, with atoms and sub atoms and those stuffs. Apart from that, there were some humours inserted into this movie, which made it more interesting. Haha I really love the part where when this one guy told stories, it seemed like he imitated what everyone was saying, padahal suara dia juga haha. Make sure you watch this movie later on okay!