Vietnam (Intro): I Was Hit By A Bike 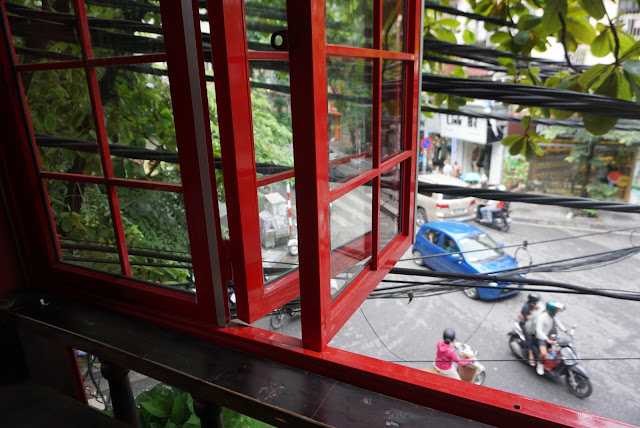 I never got hit by any vehicles in other countries before, so here's to the first time encountering it.

If any of you guys follow my Instagram: @dyllarezan, you probably noticed that I just came back from Hanoi, Vietnam. One of the things in my to-do-list while waiting for housemanship is to update my travel experience for these past few years. I should continue with my India trip first, then continue with China, Taiwan, Bandung, Brunei, and a few local trips. Anyway, allow me to skip all those and publish posts about my most recent trip to Hanoi first hehe.

Traffic in Hanoi was more or less like India and Indonesia. I was not surprised by the honks anymore, not like the first day when I was in India (click this link to read it; India Trip Day 1 Part 1 -Airport and Honk) hehe. One thing for sure, just like India, you had to be super brave to cross the road. Like, super super brave, or else you will never get to the opposite. Forever. Haha that's kinda exaggerated, but it was scary, especially during peak hour.

Everyone knows Melaka has a lot of traffic lights. So as Vietnam. But, one thing in Vietnam is it would be very bizarre if a Vietnamese follows the traffic light all the time. I remember looking at a t-shirt showing a picture of a traffic light as below; 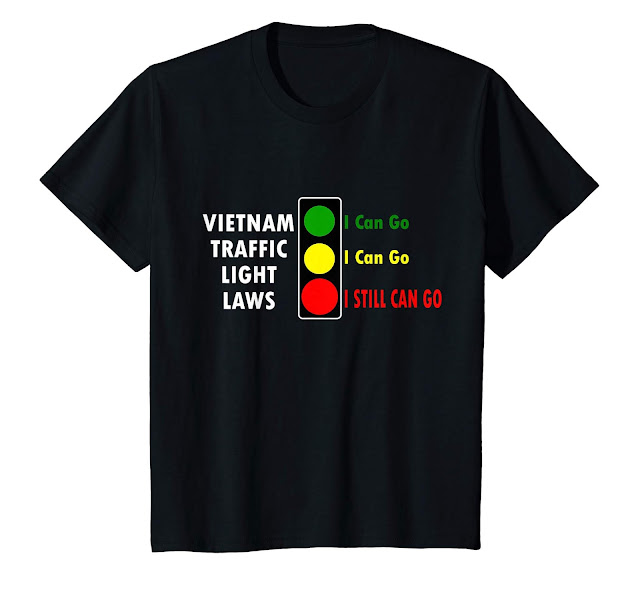 They themselves know that they don't obey the traffic light rules haha. And it was even mentioned by our tour guide to Halong Bay.

Anyway, on Day 3, since we just reached Hanoi from Sapa very early in the morning, we decided to just stroll around Hanoi on that day. We walked a few kilometers from our hostel, stopped by at a coffee shop, then to a lake, etc. I already planned on places we should go, and at 7pm we were supposed to go to Hanoi Train Street to see the train passes through that street. It was almost 7pm and the train street was quite far from our stop, so Sobri booked a Grabcar. The traffic was already hectic, and Grabcar or taxi would simply stop anywhere by the roadside. Vietnamese people are so pro that even though they rarely use brakes and obey the traffic lights, there was no accident happens.

For me, I was quite confused with the roads and lanes. Sometimes due to cars stopping by the roadside, they drove on the opposite lane instead and it made me thought that it was one way. Our Grabcar to Hanoi Train Street already reached and the driver stopped his car by the roadside, blocking other vehicles from the same direction, and we had to cross the road. The road was super, super busy that time. It was a main road and at a peak hour. There were 2 lanes, but cars from my right side going on both lanes and somehow I forgot it was not a one-way road. I already looked on my left side and there was no car or bike coming, and when I looked on my right side, I noticed the car towards us was stopping, so I thought maybe the car was giving us way to cross the road. I forgot it was a 2-way road, and clever me just crossed the road, heading towards the Grabcar.

Something hit me from the left side and my sister screamed while pulling me at the same time. It happened in a split second. I was still standing upright, but stunned. I looked at the bike rider. He was holding a phone. My sister told me that he was playing with his phone when his bike hit me.

Surprisingly, he only gave me a glance and left us, without even saying 'Sorry'. I tried my best to be 'husnudzon' (think positive) at that time. Maybe he was in a rush for something really important. Maybe. I crossed the road with Ica and Haniza and entered the Grabcar quickly. There was mild pain on the left side of my pelvis. Dah sudah. But alhamdulillah the pain slowly relieved and there was no bruise or swelling.

From that day I learned that although you should be brave, but you should never underestimate it. Here's a quick view on how was the traffic on a not-so-busy day.

24 comments:
Email ThisBlogThis!Share to TwitterShare to FacebookShare to Pinterest 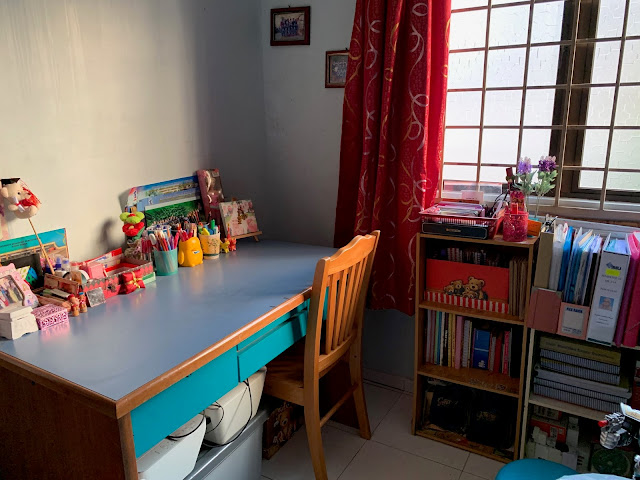 Here are some before and after photos of my room.
But before you look at them, promise me you won't judge hehe.

Have you heard about KonMari method? It's a method of organising things from clothes, to books, kitchen utensils and tools, miscellaneous, etc. The most important thing is to keep things that spark joy only. The KonMari was founded by Marie Kondo. I'm a HUGE fan of Tidying Up with Marie Kondo series.

If you know me well, you'd know how much I love organising and tidying stuff. Nah-uh, not OCD, because I do all these willingly, and in fact, actually I'd feel a bit stressful if my things are not organised. Organising makes life easier, trust me. You organise your things, you know where you put them, you place them back after using it and you'll never have to search for them since you already know where they are. And a plus point is, your room will always look neat!

But, I've never really had a chance to tidy up my things when I was in medical school. I was rarely at home and things just piled up more and more especially after every transition phase in medical school; Bukit Jalil to Seremban and Seremban to Kluang. Besides, my younger sister and brother put their things in this room as well, so just imagine how unorganised, untidy, and really semak the room was.

We even called this room 'Bilik Aib' or in English is The Disgrace Room haha.

At times when we did not know where to put our stuff, we'd dump them in this room with the hope that one day we'll clean it up and tidy it clean. That 'one day' finally came after 5 years haha. Since I finished medical school, ibu reminded me almost every day to clean up this room, but I never really had time as I had to settle up some important errands. Then one day, my sister and I decided that we can't let this happen anymore, so we spent the whole day cleaning up this room. And guess what. We managed to clean up everything in a day, and it made me wonder, why all this while I'd been postponing it haha. 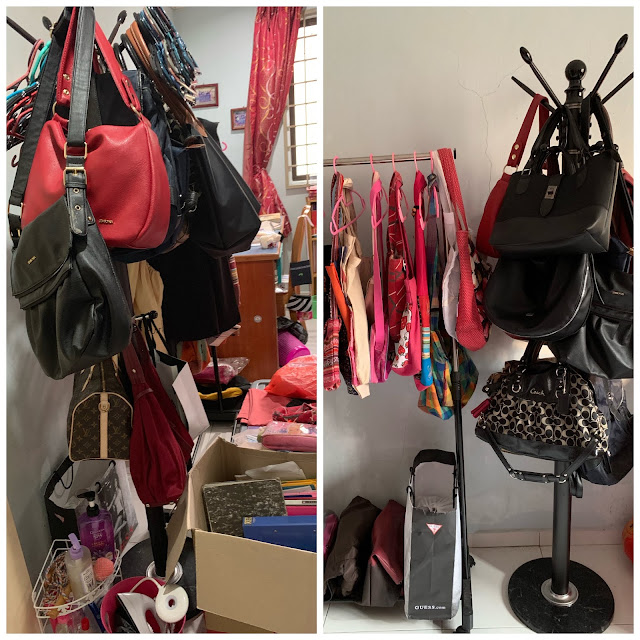 Tidying up this room made me realised that most of the things in that room are mine haha. I don't know why do I have so many things.

I did it guys! Hehe.


Anyway, how do you usually tidy up your room?
Do you follow any method?
Do share with me :)

28 comments:
Email ThisBlogThis!Share to TwitterShare to FacebookShare to Pinterest

This event of my life deserves a post here. IMU has so many professional examinations that make me lost count. What I knew, on the 6th of August (Tuesday), I had my final professional examination, the last exam as a medical student in IMU. IMU has a different system from other universities. I had OBA, EMQ and 16-OSCE stations in Semester 9, and I thought that was already the toughest exam.

The exam in our final semester (semester 10) consisted of a long case and viva on our 10 portfolios. It was easier than semester 9, but definitely not as easy as "Don't worry, you don't have to study also can pass." But what I can say, Semester 10 is one of the best semesters that I'd ever had as a medical student in IMU.

The whole batch was divided into 2 big groups; about 2/3 in Batu Pahat, and another 1/3 in Kluang. I was posted in Kluang. 5 months spent there and I had no regret. I really, really enjoyed my time in Kluang. The lecturers were helpful and inspiring, and my groupmates (especially Wen Yee, Law, Kirthirna and Marsaid) were the best. They were hardworking, and fun at the same time. I remember I'd been in a situation where I was so scared and shy to share anything or answer questions, but with them, I felt free to share thoughts, answer questions and performed examinations whenever I was asked by the doctors, sometimes voluntarily. They made me felt confident and never a second they underestimated me. Some people say a good environment will help you to grow, and I second that.

Long story cut short, 5 months had gone and there were 2 weeks left before the exam. We already submitted our portfolios and I was really glad I managed to complete it. I like all the cases that I had chosen and written. I remember that day when I handed in the portfolio, I was like, "Okay, now it's just the exam left." Lol I wished it would be as easy as how I said it haha.

I started to feel a bit stressful. Palpitations came on and off. I had a few breakdowns. The hardest part was not only the breakdowns, but also how to make no one noticed. There was once I cried before going for on-call, then I told myself to stay strong, drove to the hospital and talked to patients like nothing happened. It was NOT easy. That was why most of the study week break I spent at home. I felt less stressful at home. Alhamdulillah, food was always available (yes hungry can make me feel sad also). By the time I went back to Kluang a few days before the exam, I felt more energetic and motivated. But, I still had breakdowns. Why so many breakdowns? Haha I have no idea.

Alhamdulillah, I have supportive family and friends. Ibu, ayah and my sister, Ica were always there willing to call me anytime whenever I needed someone to talk to. They always reminded me; "Allah tak kejam kat hamba dia yang dah berusaha. Awak dah usaha. Buat yang terbaik, then doa and tawakkal." My brother, Aiman sent funny gifs and cartoons in Whatsapp. Tiara willingly became a shoulder for me to cry on. She made me felt motivated and increased my confidence. Sara was always there as well. Although she was busy preparing for her marriage, she would never ignore my call and text. S slept late to listen to me ranting even though he loves sleeping and pantang if someone disturbs his sleeping time haha yes he still does (but he did more than that actually, thank you S!). Ummi kept telling me to pass this exam so we can jalan together haha. Anis gave me a lot of study and exam tips. She always sent me a long texts, answering my short question, making sure that I really understood it. From time to time, Sarah would check on me, how were my preparation and stuff. Sanaa, Nadia, Nawal, Kak Ummi and Farhah were soooo helpful. I stayed with them a few days before exam. We revised together, laughed together, made fun together, ate together.

There were a lot other people who involved, which I could have never done without them. I am really really really thankful to have them in my life. I would never trade these people with anything else in this world. They are so selfless, so kind. They inspired me in ways that I don't think they've ever realised. Thank you!

Okay now, I present to you *drum roll*..

And last but not least,

Alhamdulillah. Thank you Allah for this.