"We were smiling and chit chatting happily in the car without knowing what we had to face later. The first day in India and I already thought of going back home."

Here's the photo of Old Delhi Railway Station in the morning. 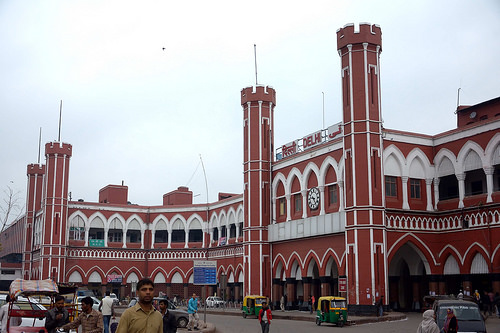 We bought our train tickets a few weeks before going to India. The station code *DLI stands for the Delhi Junction Railway Station, which is also known as Old Delhi Railway Station. None of us had been to India before, so after looking at the above photo with the help of Mr. Google, we were kinda confident that to arrive there early in the morning should be alright.

But, we were wrong.

We arrived at the station around 3.45am. It was freaking scary. The entrance where the prepaid taxi stopped was just the start of our nightmare. The taxi guy said he couldn't and refused to enter the station compound and just left us outside of the gate. I was like.. then how are we supposed to get into the station?! Luckily, there was another Indian family who arrived 5 minutes after us. The family of 3 consisted of an old aged couple with their son. We followed them, walking until inside of the station.

The pathway from the entrance was super duper scary. I couldn't imagine how the four of us, girls, would enter the station if the family wasn't there. The road was damaged. There were a lot of men walking here and there. And some were sleeping on the road. As we walked, most of them looked sharp, straight towards us, from the beginning to the corner of their eyes. But I don't blame them because Muslims there usually wear black clothes and cover their faces. I understand that after being in India for a few days.

The old couple who accompanied us are really nice, but unfortunately we were not going to the same place. We thanked them and went inside. We thought we were already safe after entering the station, but the thought just slipped away once we saw people lying down and sleeping all over the place, while some of them were wandering around.

The fact that the 4 of us are girls made the situation even more scary. If anything happened, no one will help, no one will know. We prayed hard the train will arrive earlier than its schedule and everything will be fine soon. We waited at the platform where our train supposed to be 1 hour later, but many eyes were on us. So, we stepped back a bit and stayed quiet where we were.

I felt a bit down and scared at that time. I was thinking about how my parents convinced me not going there because they were really worried about the 4 of us. All those mixed feelings attacked me at once, but I know, all I could do at that time was to stay calm, so I did. It was the first day of our 14-day journey, but I already thought of going home.

But, it's not their fault though. I know people always say this and that, but Alhamdulillah most people that we met were the good ones. And about the train station, they are already used to that situation. For them, it's normal. Some of them might come far away for a morning train, or maybe their train had delayed for hours, so they had no choice other than to sleep there. Nonetheless, this whole experience taught me one thing. Lower your expectation, then you'll be happy throughout the whole journey. InshaaAllah (If He wills). Because after the unforgettable incident, I wondered how we could survive for another 13 days, but Alhamdulillah everything was wayyy better than the first day.

After about 1 hour waiting there, the train still hadn't arrived yet. Our sim cards were still useless. We couldn't activate it to check were was our train at that time. I bet it was delayed. Fatin and Sanaa went away for a few mins to look at the screen for our train arrival and departure time, but nothing was mentioned. Tired of standing, we looked around for any chairs. Then we saw a McDonalds inside the station. How come we didn't notice it at the first place?

Better to wait inside the McDonalds rather than standing outside, we entered the McDonalds. Our stomach growled and rumbled. We were kinda doubt the halal status, so we only ordered some french fries. In the McDonalds, we met a group of Singaporean aunties who were waiting for their train to Shimla, which had been delayed for 8 hours. The aunties told us about their trip, and gave us some tips. I felt so relieved we found this McD, because at least we didn't have to wait outside. But, once in a while 2 of us would go out and check for the train.

At 6.15am, we almost fell asleep when we realised the train arrived. We pulled our bags and immediately entered the sleeper coach. We booked the 'sleeper class' for all the trains between the cities as we could choose to sleep if we wanted to. It was really foggy. I sat near the window. Nothing much to see outside. Only bricks and bricks and bricks.

7 hours to go, I told myself. I made myself comfortable and immediately fell asleep.

I woke up in the middle of the journey. 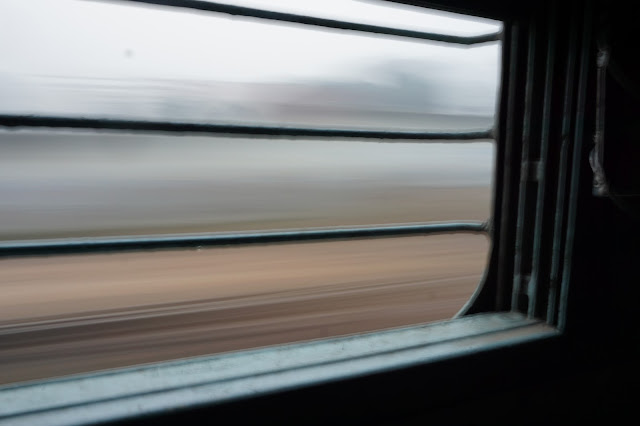 We put our bags near the window, where people can't reach just in case all of us accidentally slept at the same time, which eventually we did haha. Yelah semua penat, satu malam tak tidur. 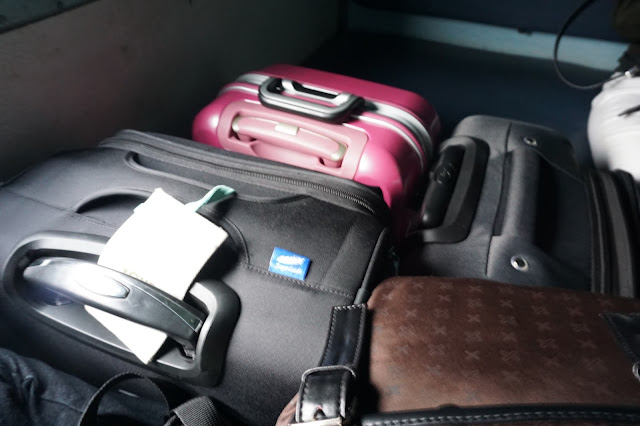 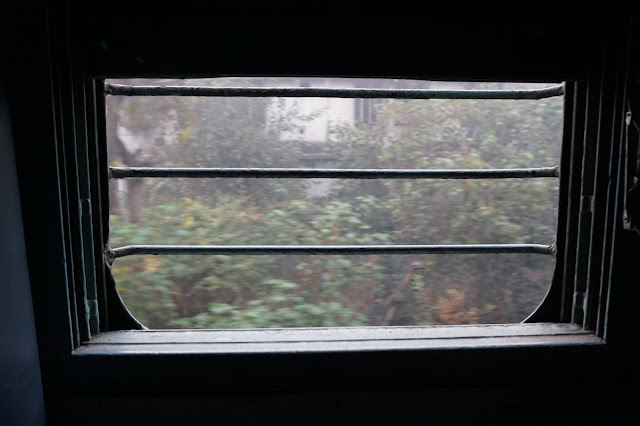 The view inside the train. Because it was winter, so we didn't feel hot at all. In fact, we were shivering cold and wore a few layers of clothes. As you can see, those are the uppermost bunk beds. There are 6 bunk beds in each area. The middle one can be put flat against the wall and we can sit on the lower bunk. 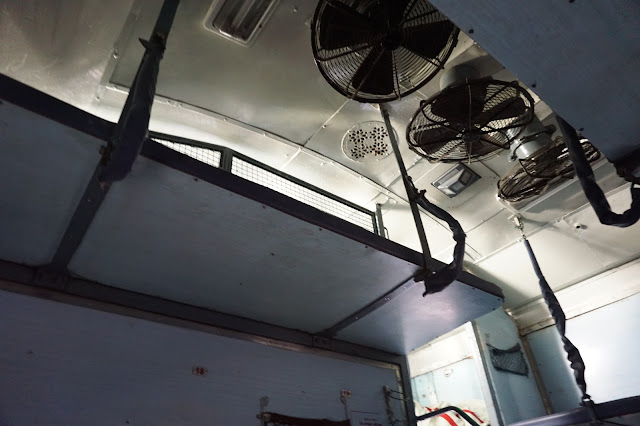 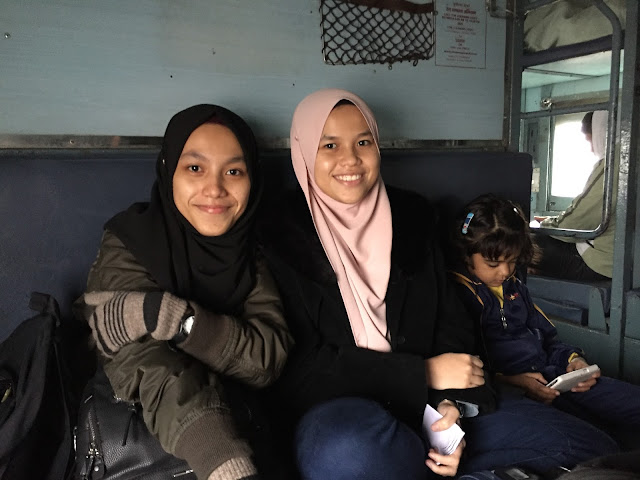 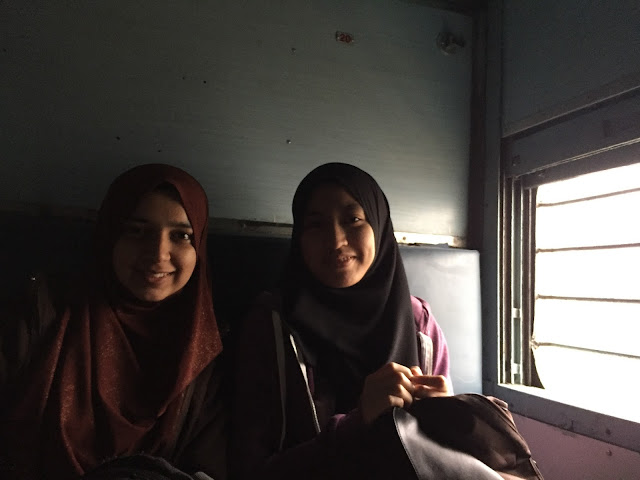 It was really foggy outside. 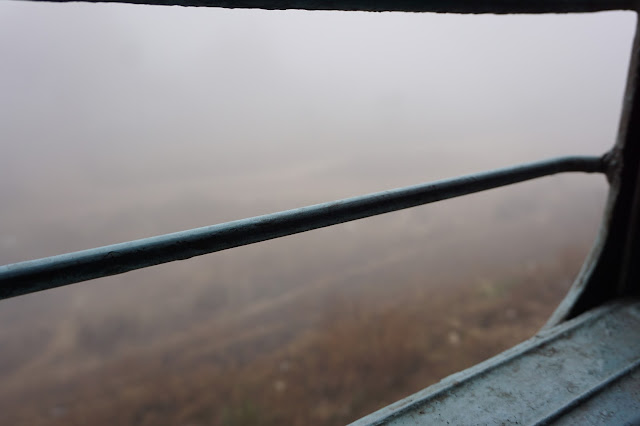 Even though the train looked old, a socket was available in each 6-bunk-bed area of the train. 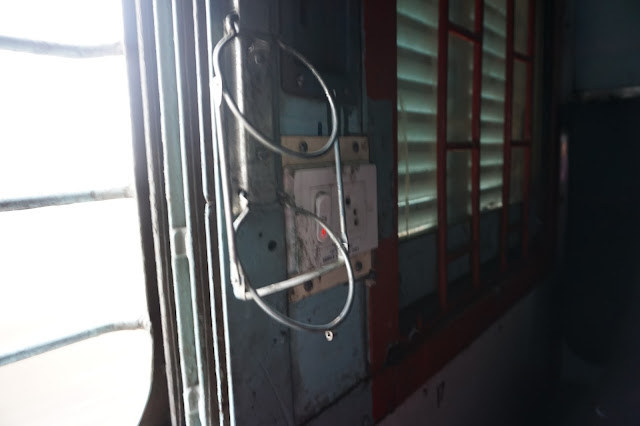 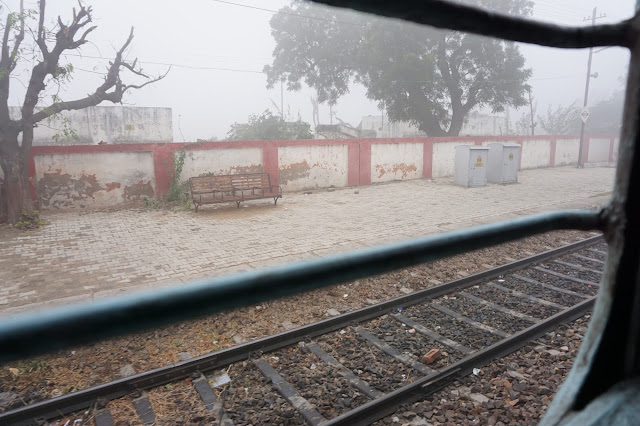 This photo below looks like paddy field, right? But, actually it's not. They are flowers from where a type of oil is produced. Not sure what the function of the oil, but later on an old lady told us that the oil is for hair, skin, etc. 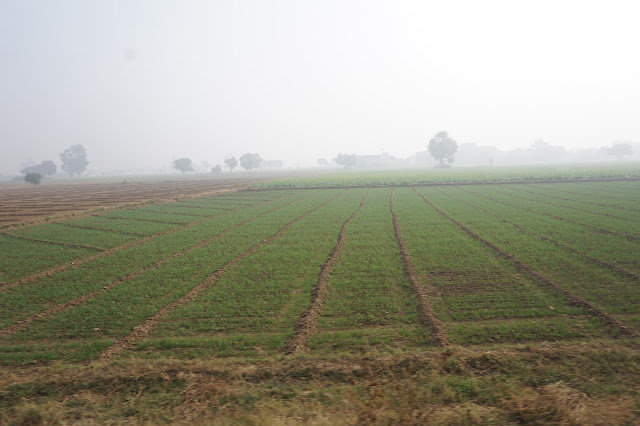 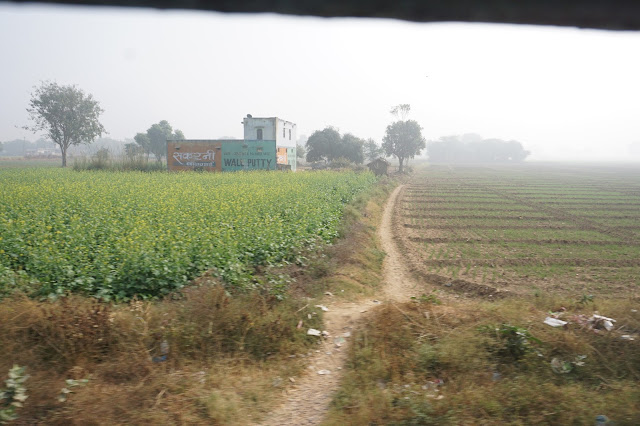 7 hours passed and we arrived in Jaipur. As we went out of the station. . .