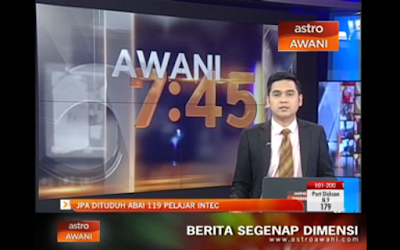 I saw this title on Facebook and instantly clicked on the video before reading the description. The video showed 2 guys telling the media that they felt cheated as JPA stopped their contract with them without giving a warning that they should at least get 9-11 points and kena sambung belajar dalam negara. Those who don't know might wonder what these points are all about, so lemme tell you that first. Points are entry scores that are used to apply for universities and colleges.

That means the total maximum points that one could get is 15 points with either A*A*A* or AAA or mixture of A* and A. The total minimum points that JPA students (nowadays) should get is 9 points-- CCC or BCD or ADD because in the video itself they didn't mention they have to get at least CCC.

They accused JPA for not giving the proper instructions and didn't have the black and white of the decisions they made. Here's something to think about. If I'm not mistaken, only those who get straight As in SPM can apply for JPA/MARA for degree in overseas and before going to overseas, you will have to go through pre-university (A Level, IB, Foundation, etc) first and that means you have to work really hard before pursuing your degree in overseas. Getting a sponsorship doesn't give a guarantee that you would study abroad.

I'm not the right person to remind you guys that you should maintain your academic achievement even if you've already secured a scholarship because to be honest, yes, A Level, IB etc are not that easy, and I had a hard time to have that kind of result, though it wasn't straight A*. I'm here only to express my disappointment upon watching a video of a few students who complained they have to get 9 points but itu pun kena sambung in Malaysia.

The first thing is about 9 points. Maybe if you guys know what we faced during our time, then you'll be really grateful to have 9 points as the cut off point. 2 years back then when I just finished my A Level, we just knew that we were supposed to get at least 12 points or BBB. Some of my friends didn't meet the condition and unfortunately, JPA immediately stopped their contract with the students and they had to continue their undergraduate courses with their own money. There's also a friend of mine who got 13 POINTS, but still JPA stopped the contract. Why? Because he got 2As and a C. Yes, although his point score was higher than those who got 3Bs (12 points) but a C ruined everything and JPA withdrew the agreement that was already given to that boy. You're lucky if you get 9 points and can further your study in Malaysia.

And the next thing is about kena sambung belajar dalam negara.

If you can't study abroad, does that mean your dream is ruined?
You can't achieve what you've longed for?
Is it wrong to study in this country?

I'd been in your shoes before and I know how does the cannot-study-abroad feel like. Even a lot of my friends also had undergone the same thing and some of them had a really tough time even worse than mine. A friend of mine got a placement for the Medicine course at Birmingham University in United Kingdom and he got 3A* 1A for his A Level result, but he couldn't study abroad (though dah turun naik JPA banyak kali) because the university was not in the JPA list for Medicine course. Awal-awal when we still couldn't really accept the fact that we had to study in Malaysia, we always argued among ourselves about the privilege that we should have gotten as some of us had a really good result in A Level, but then we remembered back ourselves, we chose this decision because we wanna study Medicine, though we got a few placements for UK universities but for different courses. We reminded each other, Alhamdulillah, at least we still can pursue our study in Medicine.

Talking about ulang alik naik JPA, I myself had to ulang alik naik not only to JPA, but also MARA, Irish University agent, Australian University agent, etc. There was a time my friend and I had to travel from Nilai to KL and stranded at that place for a few hours because we didn't know how to get a taxi as it was raining and there were hundreds of ulat sampah at the bus stop and some of them even fell off from the roof of the bus stop -.-

Maybe this is a part of your trials and tribulations before you get what you want. There's no such thing if you can't fly means you can't pursue your study and catch your dream. Unless, if your dream is to fly overseas, not pursue the degree you wanna graduate from.