I know I should have published this post last week, but now is the only time I have the mood to write something (yeah finally). As simple as today's title, allow me to skip the part where I simply changed my practical lab session and unintentionally skipped some lectures because the journey from KL Sentral back to Sri Petaling took a longer time than I expected... and just focus on what I wanna write which are about LRT and Food. Obviously, one topic has nothing to do with the other one haha.

How to go to KL Sentral from Sri Petaling?
Usually I travel by LRT then change to KTM at Bandar Tasik Selatan (where the TBS is) but that day I was in a hurry so I tried to find a way other than the KTM, because KTM is quite slow and you have to wait for around 40 minutes to 1 hour if you miss the previous train so yeah I prefer taking the LRT. I read the map for public transportation and I noticed I can get to KL Sentral just by LRT but I have to change to another line at Masjid Jamek. I took the Sri Petaling Line from Sri P and I boarded off the train at Masjid Jamek. I just followed where others go, YOLO je lah. Luckily, there were signboards everywhere, so don't worry, even if you're alone and you have never come here before, you won't get lost haha. There are 2 platforms for Kelana Jaya Line; one towards Kelana Jaya and the other one towards Gombak. So make sure you take the right platform or you'll end up taking the train to opposite way haha. KL Sentral is just a station away from Masjid Jamek. I arrived at KL Sentral and went to NU Sentral (which is just beside KL Sentral) to meet my high school aka INTI friends whom I hadn't met for monthsss!

We were extremely hungry, can even eat a horse by the time I arrived in NU Sentral so without wasting our time, we searched for the most suitable place to eat and chat. Couldn't wait further longer, and after looking at reasonable prices for lunch, we entered Gravy Factory and found a peaceful place outside of the air-conditioned space, far from everyone else.. before realising we're not in a green jungle with river underneath, just a 'concrete jungle' where the scorching hot can be felt, though there wasn't any direct sunlight and the humidity was too humid, concentrated together with the warmness. Did I exaggerate too much? Haha sorry, you have no idea how we regretted our decision at first, but then the food sedap and boleh gelak kuat so okay takpe lah haha.

We picked a table right under the fan and looked through the menu before ordering. I chose chicken bolognese, Nani chose seafood aglio olio, Tmad - carbonara and Mirash hmm not really sure what's that. I think it's a set of chicken chop, kalau salah jangan marah hehe. The prices were quite reasonable (Mirash's took the lunch set - RM15, while spaghetti range around RM20-RM28) as the portion of each plate wasn't too big or too small, even though at first I thought they were being kedekut padahal because the plate was large haha plus, it was yummayyhhh! Buat macam rumah sendiri, we exchanged our plates and tried each others' food, everything was scrumptiousss.

Sangkaya is just near this restaurant so I took this chance to have some ice cream before going back to IMU. Sangkaya is definitely one of my fav ice cream places as they serve delicious coconut ice cream! The texture isn't as smooth as gelato but the coconut taste is really rich and wake up one's taste buds, makes you want more and more especially if you really love coconut. Teh tarik ice cream is also served but I prefer the coconut one. It's a delightful taste sensation to have this coconut ice cream so every time I come here I would choose the signature one (sebab paling banyak hehe) which consists of 4 scoops of ice cream comes with a coconut shell and the isi kelapa as well! It usually will cost you about RM10. You can pick your own toppings unlimitedly and usually I would pick the coconut flakes to increase the richness of the coconut flavour, roasted peanuts, sweet corn and of course a little bit of chocolate syrup. 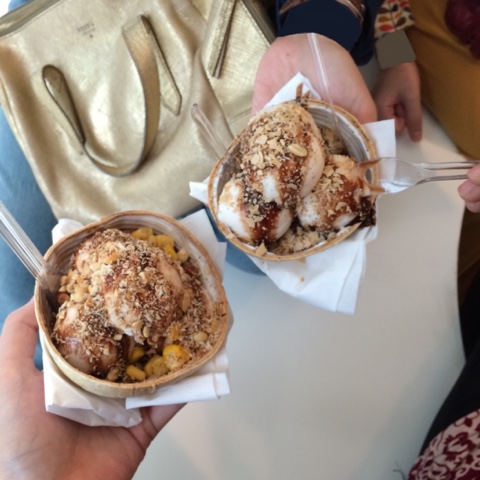 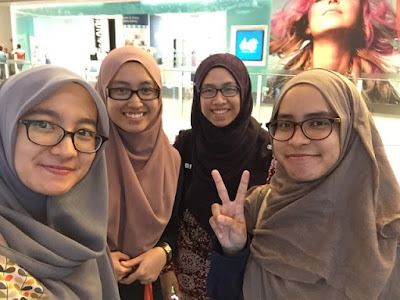 
P/s: If you have any idea on how can I improve my blog posts or wanna me to make a review on other food (visit my instagram @dyllarezan / search #Foodylla), just tell me :)