Omnomnom was once a viral word, which had been used replacing nyumnyum / yummy.
It is actually what one says either when eating something good or eating very quickly.
Full definition for "omnomnom" hahaha.

Last night ayah brought us to Perkampungan Ikan Bakar Terapung which is situated in Umbai.
For your information, Umbai is famous with ikan bakar and seafood.
Whoever comes to Malacca must pay a visit to this place!

As last night was the 6th day of Eid ul-fitr, some of the restaurants were still closed.
We just simply went to the last restaurant and sat on a table near the water (not sure whether it's a sea / river / pond haha).
We had butter prawns, kupang masak sambal, sotong goreng tepung, ikan bakar, ikan siakap masak 3 rasa and few other small side dishes.
I ordered my favourite fresh coconut drink, nyumnyum!

And usually they will directly put few bungkus of nasi lemak on the table right after you sit.
I ate 2 bungkus of them hehe fat dylla is very fat.
Nice people, nice place, nice food and nice conversation.

Here's a photo that I managed to capture.
Looks tempting right?
Omnomnom. 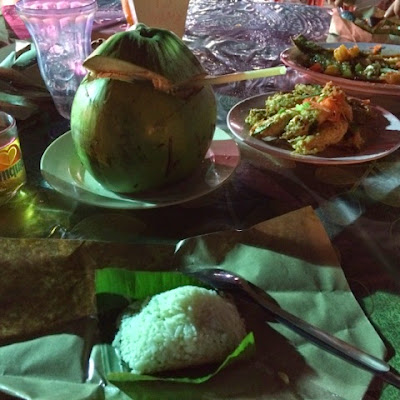 So again, if you come to Malacca don't forget to overnight and go to Umbai!
I'm sure you guys will love it.
Till here. Assalamualaikum!