- March 13, 2015
Assalamualaikum warahmatullahi wabarakatuh.
Here I am again, talking about Italy hehe. Okay janji, this will be the last one :p

Pompeii was an ancient Roman city which was almost wiped out by the eruption of Mount Vesuvius in 79 A.D. The eruption lasted for more than 24 hours. They tried to rescue themselves by setting out to flee northwards. But by that time, a dense black cloud of ash has blotted out the light, and the crowds of screaming people fleeing around them were in terror. I got all this information from a lady who guided us all way long in that area. Nampak tak keskemaan mencatat di situ hehehe *gelung angel atas kepala*

We could see some of the things left from the eruption here. Ada patung orang apa semua. Some of them were real. Sedih lah juga tengok ada tu macam tengah tidur, but semua jadi keras mcm batu. We had our best time here although the weather was so hot and I got a terrible sunburn. We tried to follow the tour guide wherever she went to get the important information about Pompei. 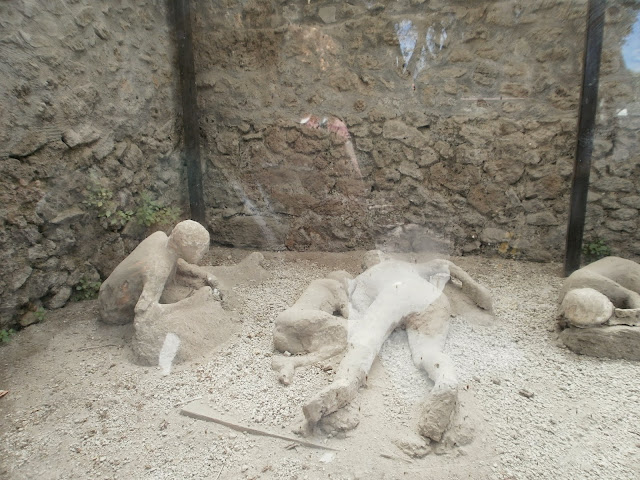 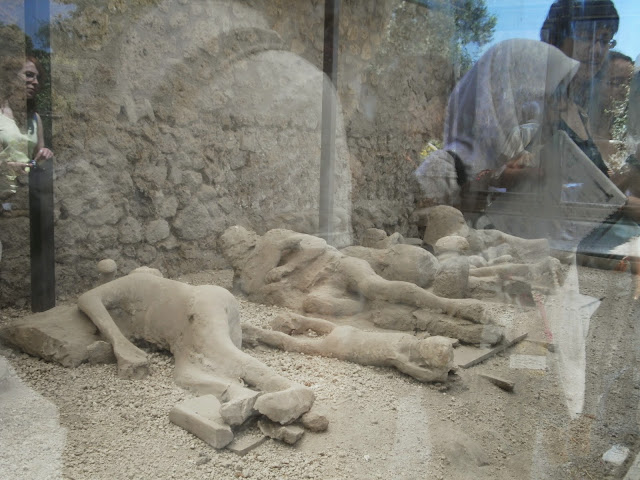 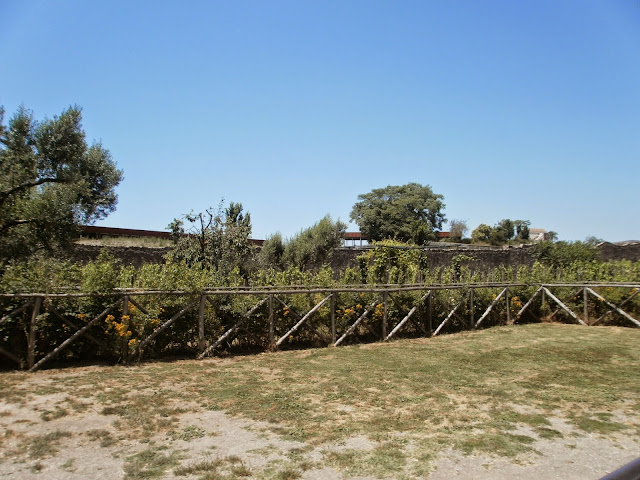 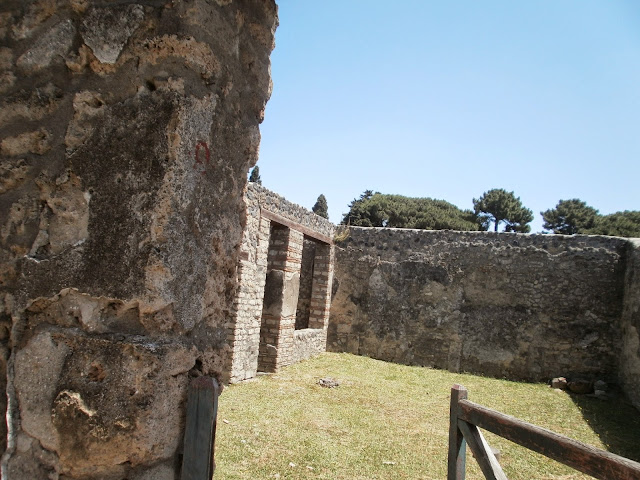 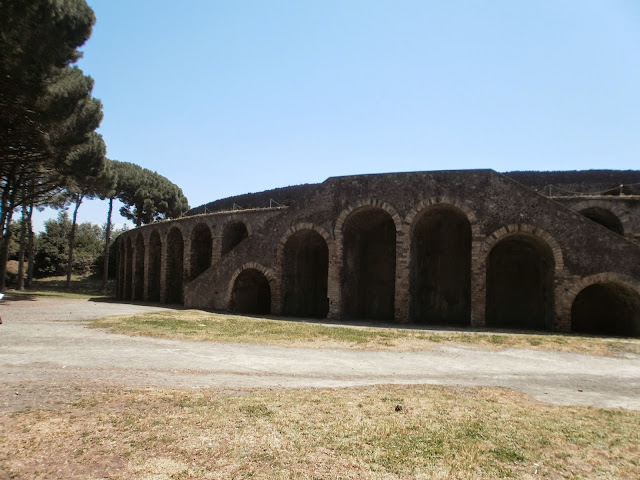 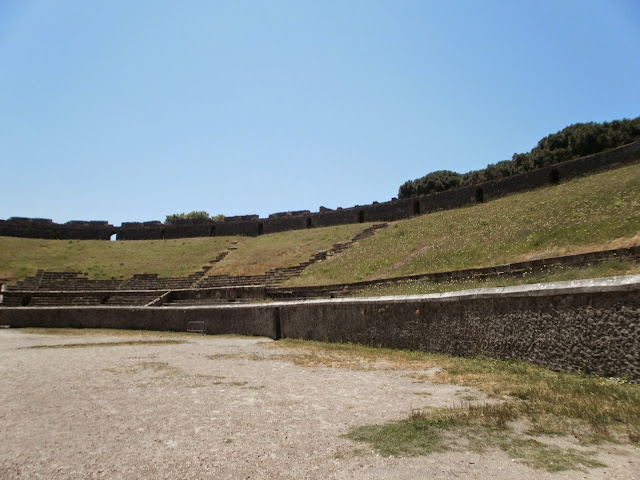 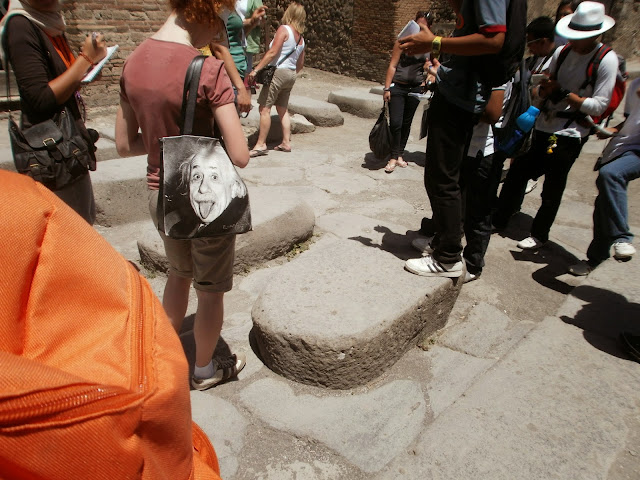 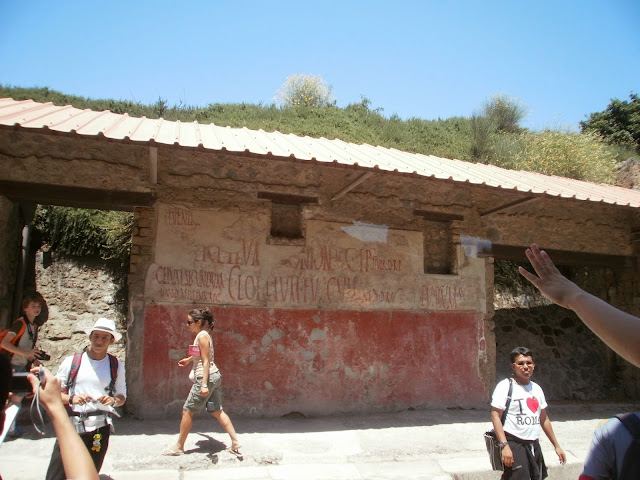 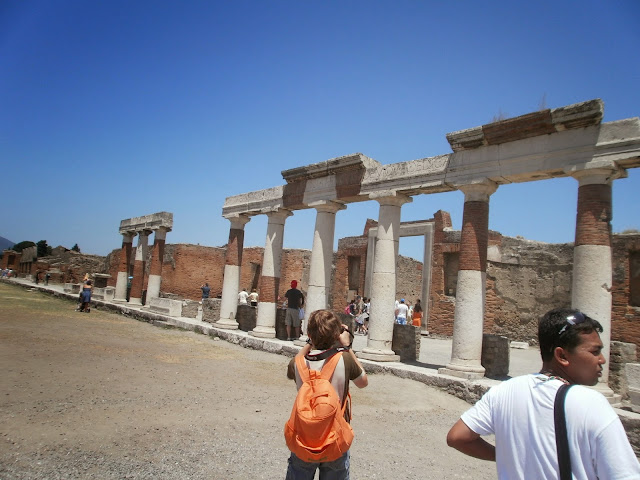 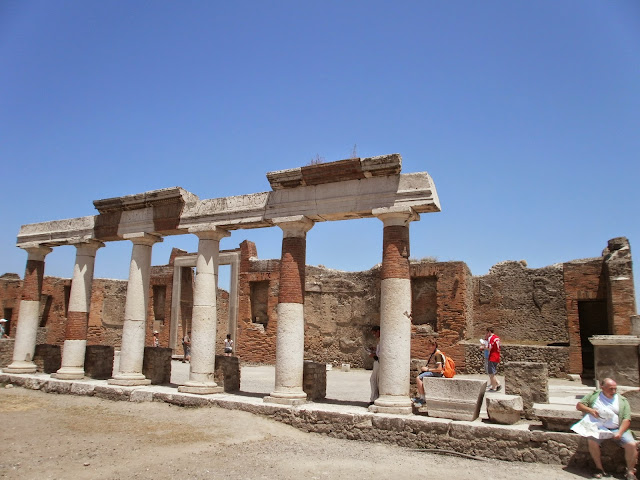 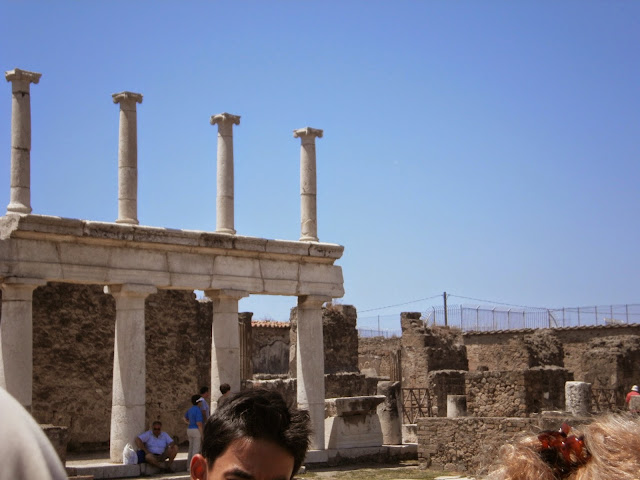 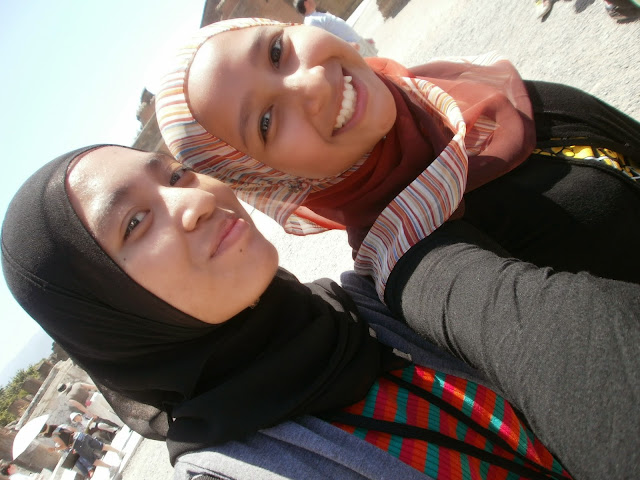 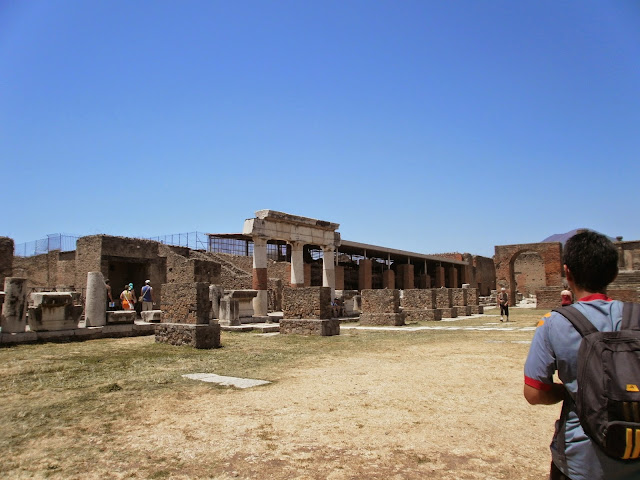 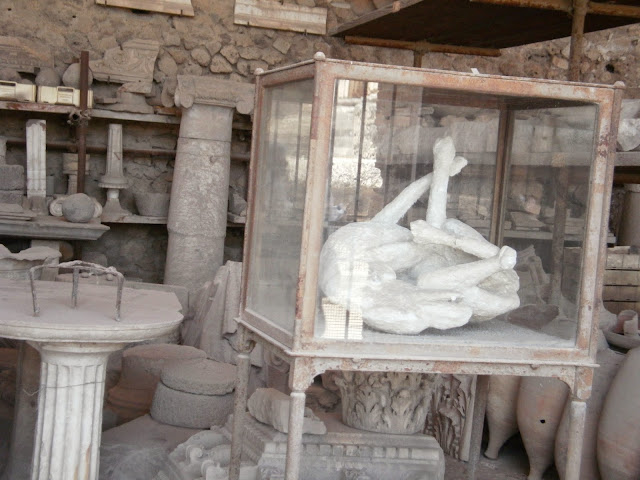 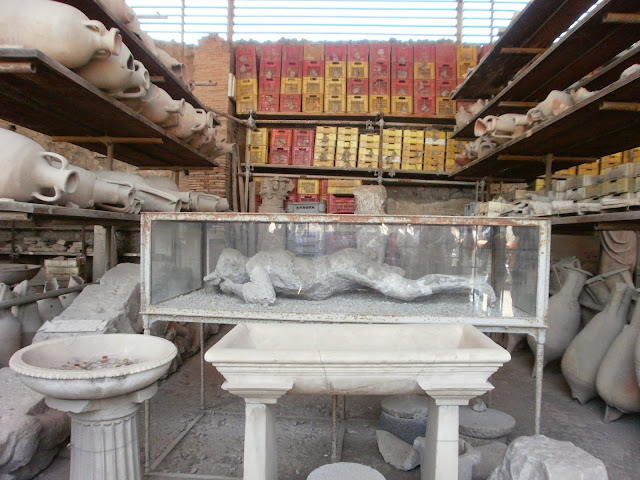 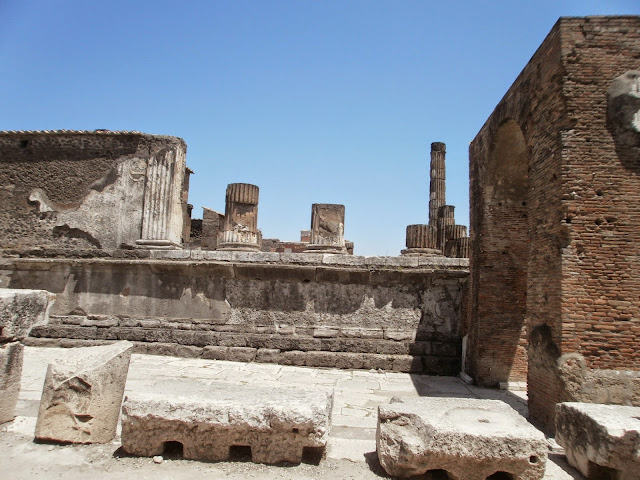 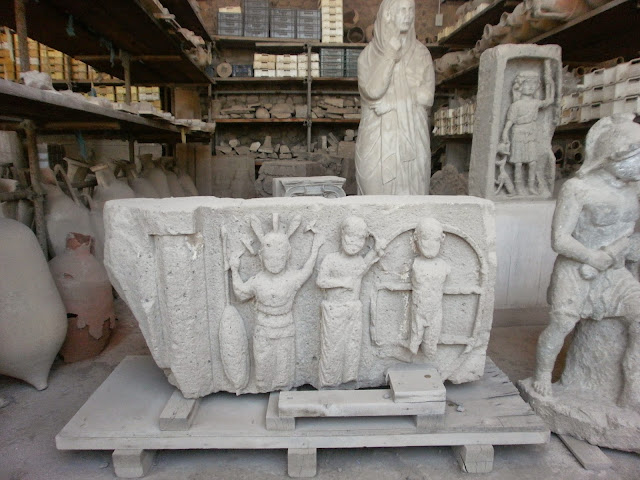 Before we went back to Colleferro, we went to the beautiful beach of Napoli. Yes, it was very beautiful. The water was clear and blue. We took a lot of pictures together with the delegates. I wished I could bring my family along to look at the beauty of this beach. 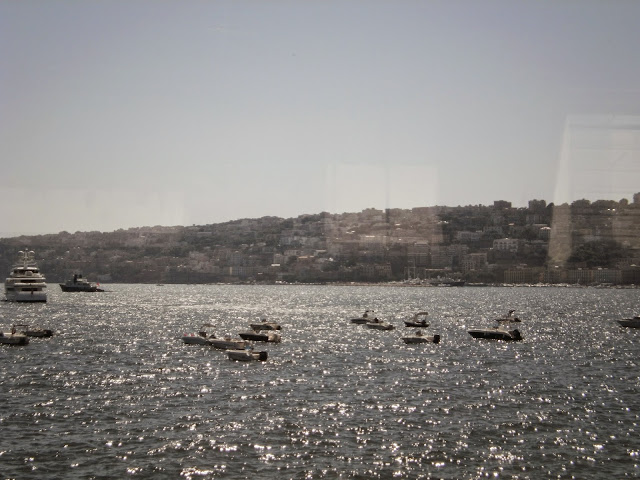 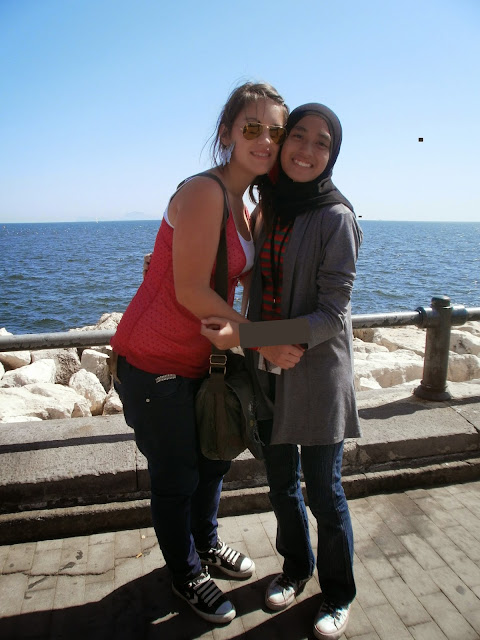 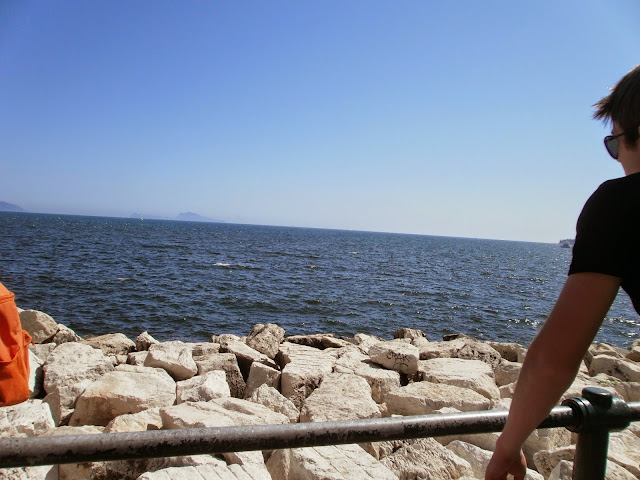 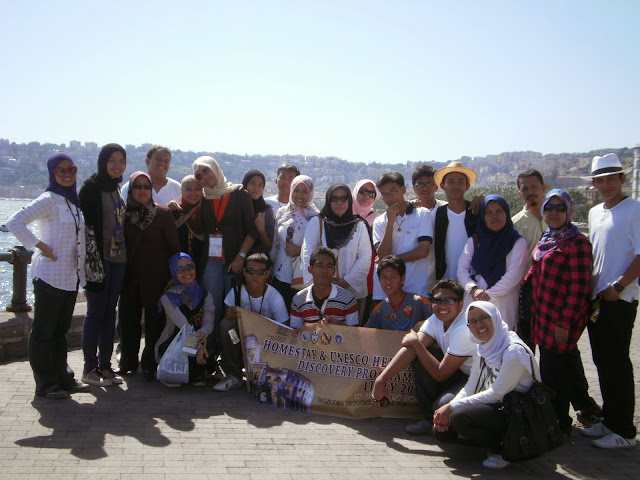 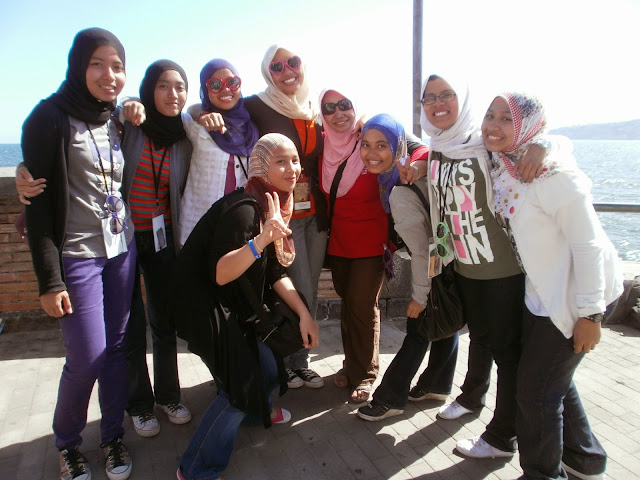 Aldo (Caterina’s father) fetched Caterina, Giulia, Najja and me to go back home. At night we were having dinner when Benedetta came and called Caterina. They went into Caterina’s room. They seemed busy doing something. Then suddenly they came out of the room and brought out 2 envelopes and 2 things wrapped with silver wrapper. Benedetta gave them to both of us. They asked us to open the envelope and read the card. We couldn’t hide the sadness anymore. Najja cried and then followed by me. We were touched by the words in the cards. They said that they would miss us when we were not in their home later. Caterina’s mother and Benedetta cried too. We were quite ashamed because Giulia was there too.

Before going to the park, Benedetta asked us if we could follow her to her grandparents’ house. We agreed. We met Caterina’s grandparents. They welcomed us with warm smiles. Caterina’s grandmother couldn’t walk fast because she was too old. A few minutes later, Caterina’s uncle came with a girl and a boy who were his children. Her daughter was very cute. 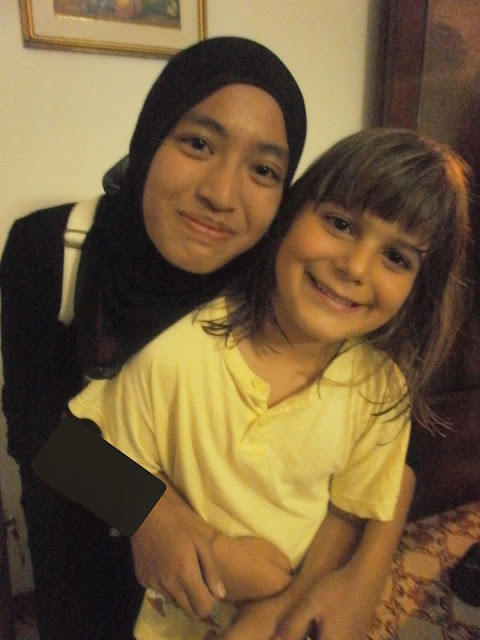 Caterina’s grandmother said something which was translated by Benedetta. Her grandmother said that she hoped she could see us again. But maybe couldn’t because she was too old and she could die anytime. Her eyes were watery and I started crying. Sedih kot T.T After that, Benedetta sent us back. Benedetta said that she had to say goodbye now because tomorrow, maybe we wouldn’t see her again because we had to go out early. Again, I cried. I hate the word 'ciao' and ‘goodbye' on that night.

Oh, I wished we could stay for a little bit longer. Everybody was sad, so we tried to cheer ourselves up by singing ‘rasa sayang’ song. We arrived in the airport. Before boarding the plane, all of us hugged each other and cried. It was a very sad moment. Why were we crying? Because we love them. They taught us many things. They taught us what the value of friendship regardless of religion, country and race. TBH, I REALLY MISS ITALY :(