Finally, it's a post about Penang (yeay!), which I went a few weeks ago on July 2015.. berhabuknya lahai cerita ni dah haha. But nak cerita juga mana lah tahu it might be useful for anyone who wants to go Penang for food hunting hehe.

It was a 3 days 2 nights trip (at first we only planned for 2D1N but we extended it) and the total budget was around RM400+ per person. We went there in Tiara's car with Tiara as the driver and Afar as the co-driver. Nisa and I? Kerja makan and ambil video & gambar kat belakang haha. Our main plan was to have a food hunting and sambil to singgah a few interesting places there. It was really last minute, malam ni plan lusa pagi terus pergi.

Around 9 o'clock they came to my house and guess what..

Mak aih, bangun bangun tengok Tiara and Afar had been already waiting in front of my house! I hurriedly went to unlock the door and rushed into the toilet to take a bath. Cuak tak cuak orang dah ada depan rumah, princess sangat! They told me if I were still in bed, they have to leave me and pergi bertiga tsk tsk sampainya hati.. but serve me right who asked me to be so excited last night and ended up oversleeping today haha.

Our journey started around 10 o'clock.

It took about 5 hours to arrive Penang and were frigging hungry at that time, so we straightly went to one of the famous nasi kandar restaurants called Nasi Kandar Tajuddin Hussain, which is situated in Little India.

We ordered the rice and kuah separately and I as usual, yang tak biasa makan kuah campur campur just makan nasi with one type of kuah at a time, but they told me it's not nasi kandar if you don't campur campur kuah. I really like the ayam ros, as well as the fish curry! On a few tables, there were some jugs contained 'kuah cair', some called it as soup. Idk what it is actually, ada yang tuang sekali dalam nasi, ada pula yang hirup macam tu je. 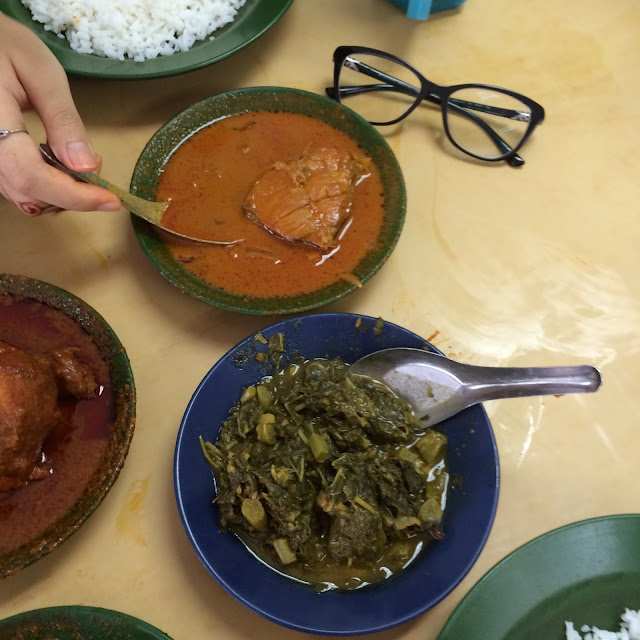 We took a brief walk in Little India and stopped by at the famous samosa stall. I was too full, Afar bought a (large) samosa with potatoes gravy inside and a kuih deram. The taste of the samosa was really delicious, just like what they wrote in the review section I saw in swarm app. 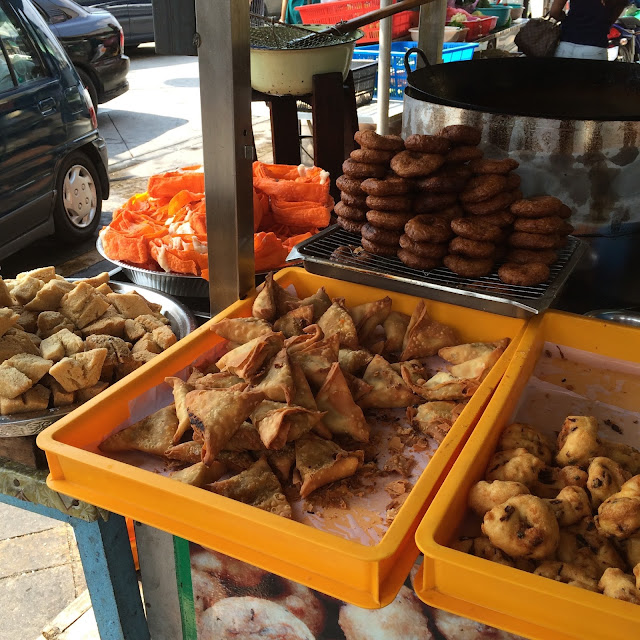 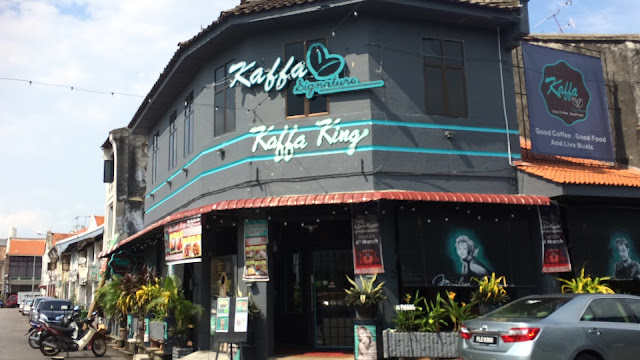 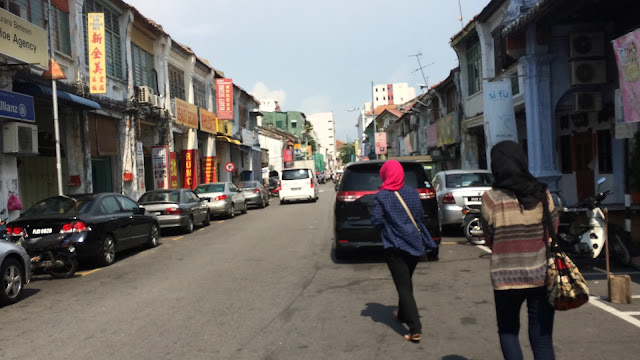 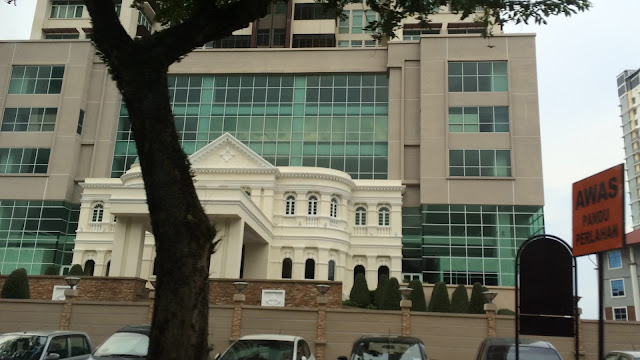 We checked in into Gurney Hotel (in Georgetown) and put our stuff inside the room. The room was for 2 people I guess, but we simply 'sumbat' everyone but to be honest, it was really comfortable as the bed was large, enough for 4 of us and there were hot shower, bath tub, iron & ironing board, cupboard, television, fridge, and even peti besi pun ada jugak! Haha. It's a 4-star hotel and they provide various facilities, including spa, restaurant, swimming pool, etc. Gurney Hotel was also a last minute choice. It was a little bit pricey (around RM250 per night), so if you're on a budget trip, don't worry. There are a lot of cheaper rooms and hostels in Penang.

Mee sotong Padang Kota Lama is a must-try-food if you come here for food hunting. Mee sotong is basically a plate of oily-looking-but-actually-it-is-not-too-oily noodles with a spoon or 2 of sambal sotong on top of it. Nisa bought a glass of coconut shake while the others, including me, ordered 3 ABCs. On top of the coconut shake was a scoop of coconut ice cream, ahh so delicious, just like Sangkaya! If only I could ask for the ice cream ONLY haha. 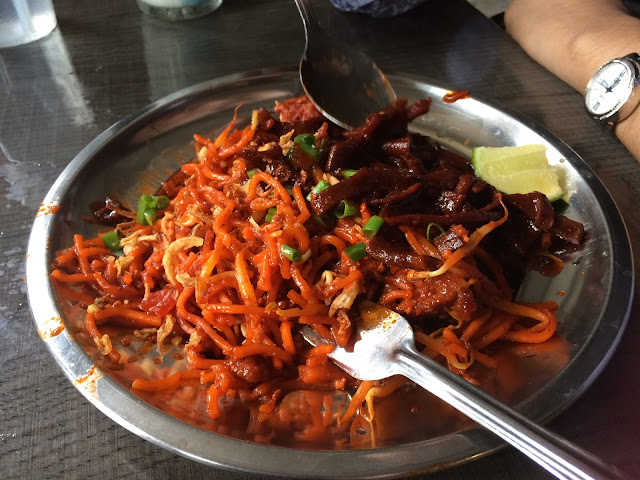 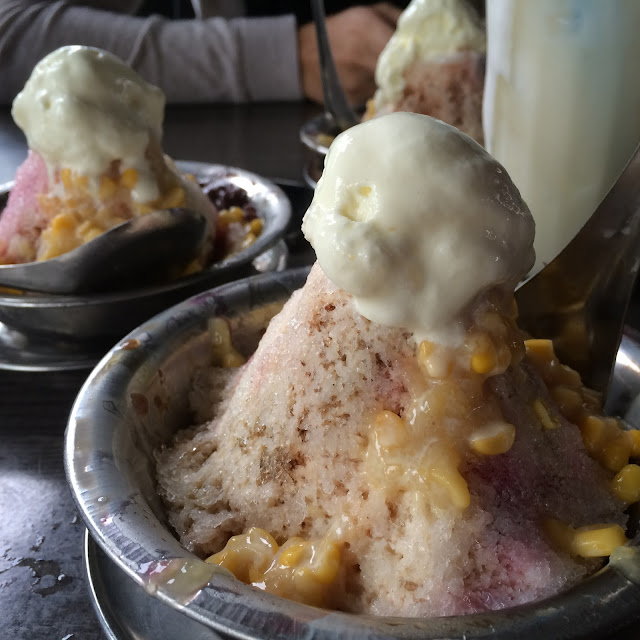 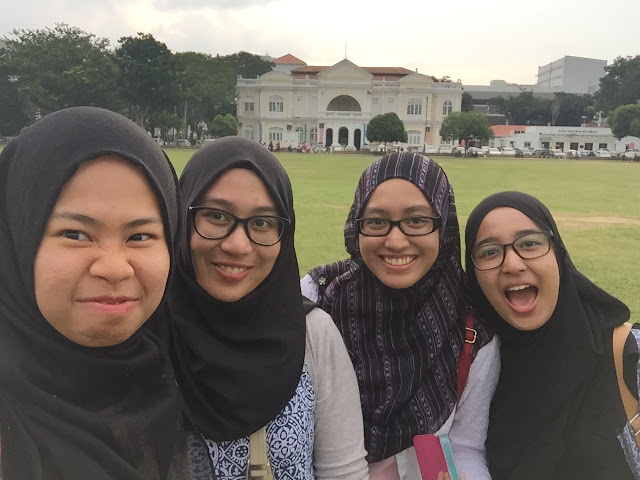 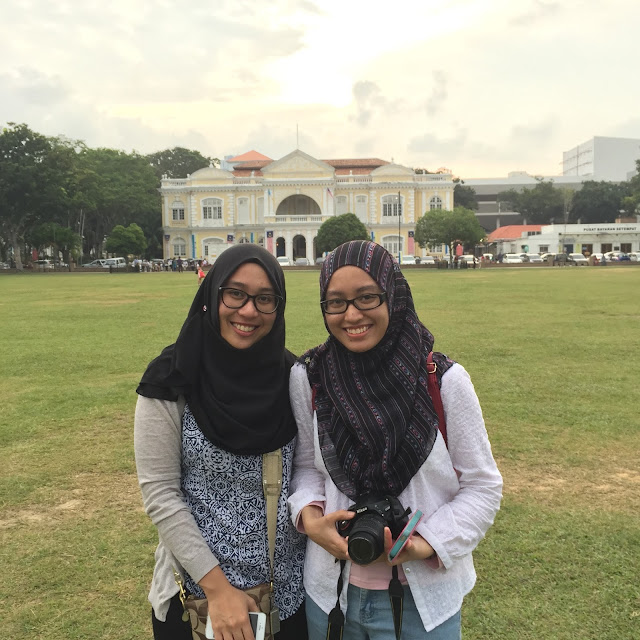 We went back to the hotel to pray, golek golek atas katil, cuci muka jap before going out back to the Little India. Still full at that time, so we entered a henna shop to wear henna weeee. I don't really favour wearing henna on my hands because I rasa macam orang nak kahwin haha but it was worth to try, alang alang dah sampai sini! It was beautiful, then time mengeras nak tercabut rasa sakit sebab henna tarik bulu roma sekali hahaha. 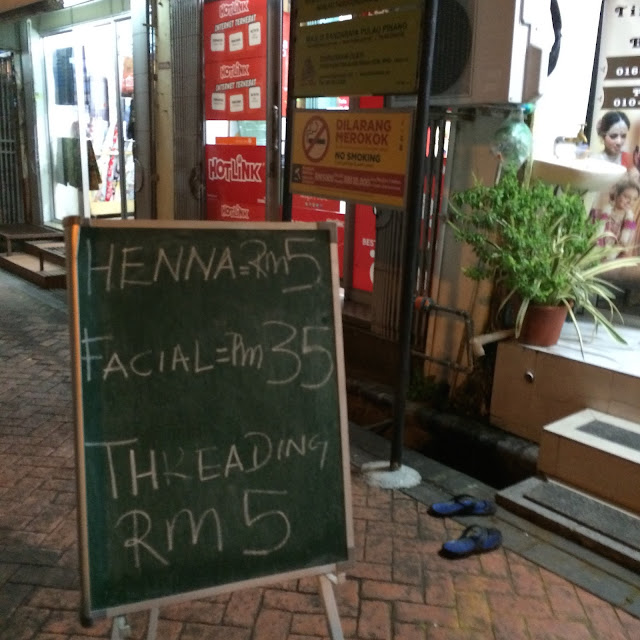 Just near the henna shop, there is a restaurant, selling nasi dalca. Nasi dalca is a plate of rice with kuah dalca, the gravy we usually eat with roti canai, and a fried chicken. Sedappp! You should try this nasi dalca if you were to come here. Near the nasi dalca restaurant, we found a stall selling capati. We took away some capati to be eaten in our hotel room. It looked really unique as the capati was cooked by putting it in a flat 'cage' and put it on fire. Lepas tu orang tu terbalik balikkan sampai lah masak. Ke memang usually they make it like that? Haha noob Dylla is very noob. 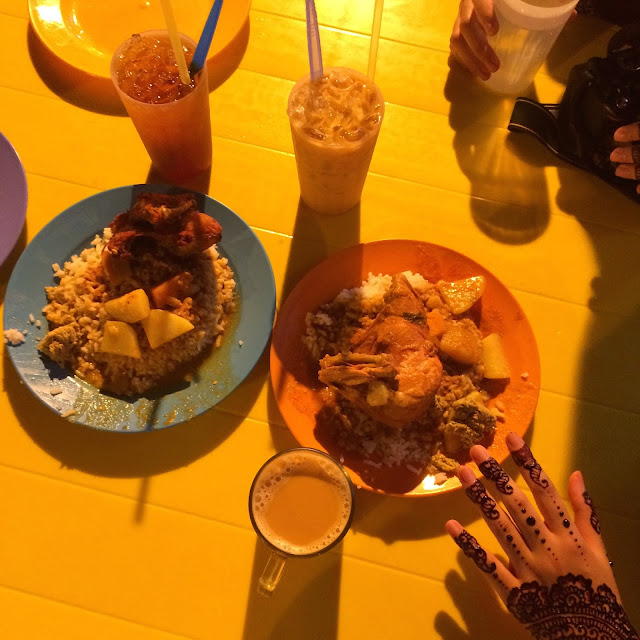 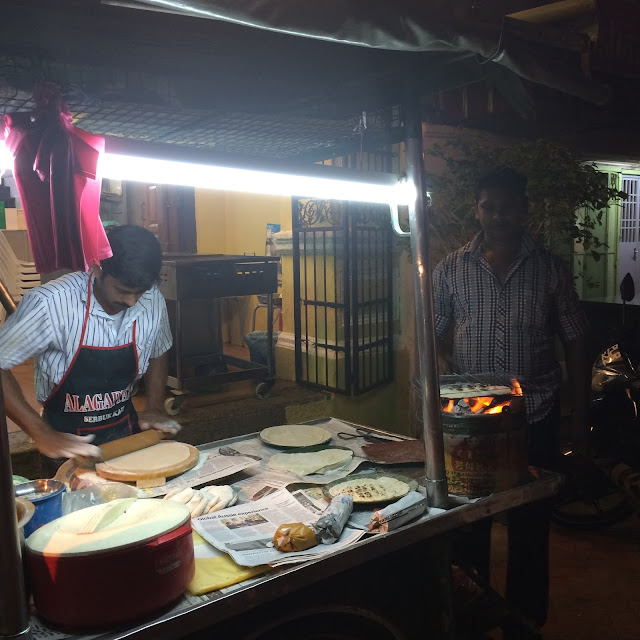 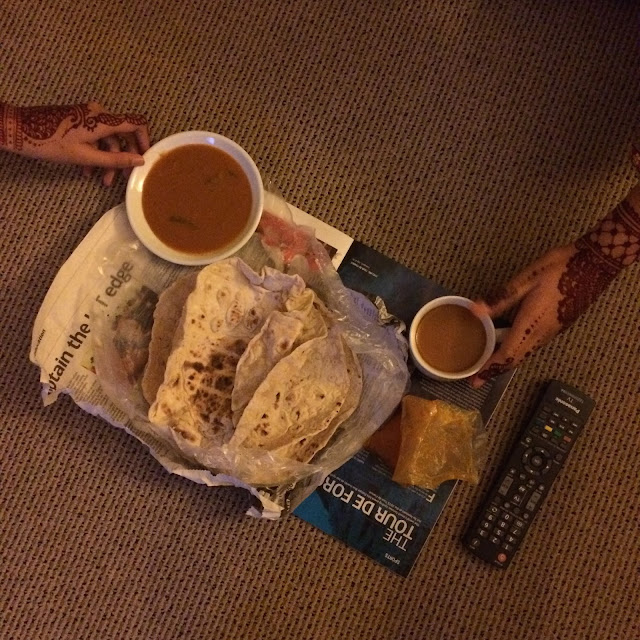