The night wasn't as cold as I thought, then I realised the static-not-swinging air conditioner only blew to the other side of the room hmm I bet Eema must be shivering last night, kitorang pula sedap je tidur aiyo later on we'll make sure the air conditioner swings okay? I think I heard someone knocking the room doors at 6.00am, but I refused to wake up as my alarm clock hadn't rung yet, so I continued sleeping before waking up for real at 6.30 and instantly entered the bathroom to take a bath. I prayed and got ready. Others started to rise, had their shower and we had a breakfast with food we bought yesternight before kicking off the day, walking 1.5km to the hospital.

I only brought my white coat and necessary things such as stethoscope, pen torch, pocket watch, name tag and ID card, 2 pens, measuring tape, a notebook given by Tiara and the most important thing, logbook, which was used to record everything. We straight away headed to the hall for a short speech from the deputy director of the hospital, Dr Guna and a briefing about our tasks by an IMU doctor, Dr Sasi.

She gave us the itinerary for today. We were divided into pairs and each pair had to clerk and take a history from a patient in the male ward or female ward based on the bed number given, and we also got the chance to do the physical examination on the patient if she/he allowed us to do so. (Finally we could do with a real patient who had a pathologic condition!) If we still have time after the first patient, we could go to another patient to clerk another case. There would be a case presentation and discussion in the evening, so we were required to jot down every single history taken and finding we got.

I had been paired with a Chinese friend of mine, Saw Yeong. We went to the female ward to meet our 'patient', but unfortunately she just cried and I don't think she was really stable to answer our questions and stuff, so we decided to find another patient, who wasn't taken by anyone else. The male ward is situated at the other side on the same floor. We walked to the male ward and found an uncle sitting on a bed with an aunty on the bedside. I bet that aunty must be his wife. We had been advised not to look the final diagnosis in the case file and come out with our own differential diagnosis.

The uncle came because of chest pain on last Friday's morning. 'Twas a compressing retrosternal pain, which radiated to his left arm and back. This was his first time experienced it and there was no exacerbating factor as he straightly went to the nearest clinic. He felt better after they gave him sublingual GTN and he rated the pain as 10. The first thing came into our minds was; myocardial infarction (MI) or its layman's term is heart attack. He vomited a few times before the chest pain came, sweated profusely and had an episode of shortness of breath. Though we kinda figured out that he had a heart attack, but we still had to rule out other differential diagnoses; GERD, asthma, etc. He had neither bitter taste in the mouth nor burning sensation in the chest. He also had diabetes and hypertension, and he doesn't really compliant to the medications. Then we tried to assess the level of diabetes and hypertension; no blurry vision, no abnormal great thirst or hungry, no increase in urination, having a headache was normal to him. Past medical; never admitted to hospital, never undergone any surgery. Finally, we covered about his family and social history, then moved forward to do the physical examination.

Upon general physical examination, no abnormalities on the hands and arms except for the pulse which was irregular and the volume was sometimes strong, sometimes weak. He had a lil bit of off-white discolouration in his eyes, but his mouth was okay. We did cardiovascular (CVS) and respiratory examinations on him. Almost everything was normal, though his heart beat couldn't be felt upon palpation. No parasternal heave, no thrills. His S1 and S2 (heart beats) were synchronised with the carotid pulse and there was no murmur or any other additional sound can be heard. For respiratory, everything was fine, included his chest expansion and breath sound, though the air entry was kinda reduced, but I'm not really sure. Maybe it's normal for an older patient like him.

Then we looked at his case file and yes, he had a heart attack (myocardial infarction), together with uncontrolled diabetes and ketosis, which causing him to be admitted into the hospital. My friend and I jotted down almost everything, included the medications given and tests done, so that we won't miss out anything important.

We continued with another patient from the female ward, there was nothing much can get from the woman as she was about to start crying and I didn't wanna make anyone cries just because I asked her some questions, plus the time for history taking was over and we had to gather back in the hall for case discussion. 2 of my friends were presenting that time about a girl who came in because she always felt tired easily. We had a break after the discussion and then we were divided into 3 groups, A, B and C, which went to either haemodialysis place, accident & emergency (A&E) or chiropractic side and we rotated every 25 minutes.

In the evening, we had a class with a doctor from Hospital Jempol itself and basically what we did was clerking and doing physical examination on the patient supervised by the doctor.

We did the same thing on Thursday, with paediatrics ward as an addition but only until about 3pm. This time I managed to do a physical examination of abdomen on a patient who apparently had hepatomegaly (enlarged liver) and splenomegaly (enlarged spleen). We also did the renal punch and assess his kidney function. We gathered back at the hall before continuing with bedside teaching with the doctors there. Dr. Sasi warned us that we shouldn't take any history from a kid if there's no consent from the parents or guardian. We gathered in front of the lobby to take a photo or 2 with the doctors and walked back to our homestay. Then we packed our things and went back to IMU. 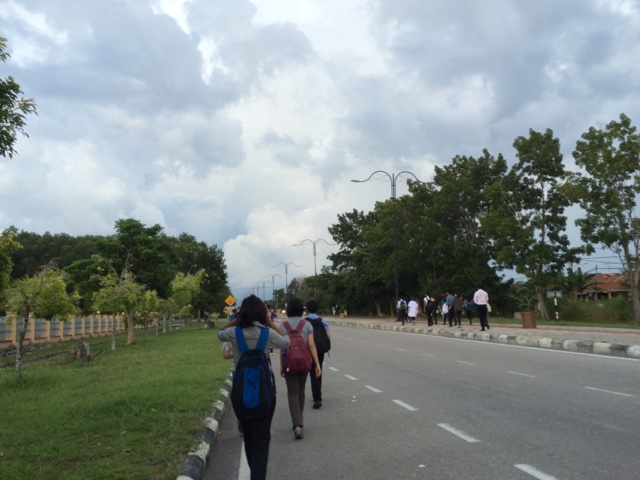 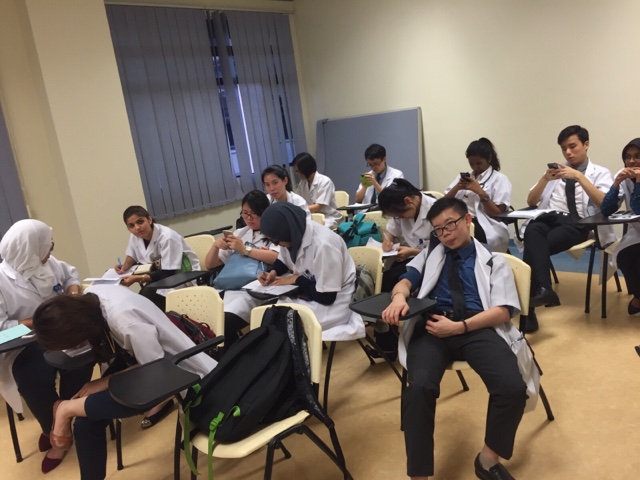 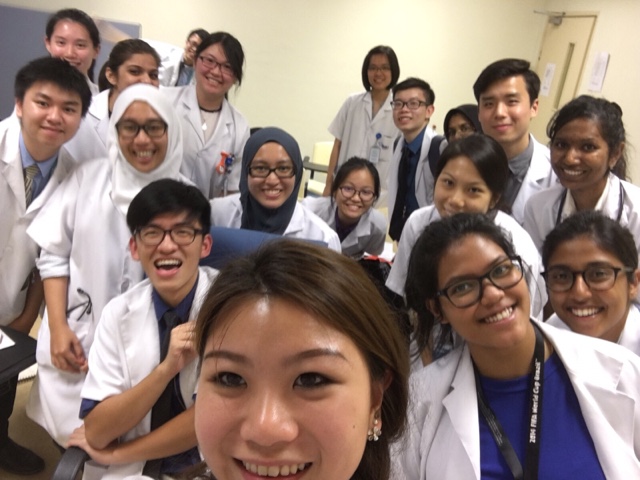 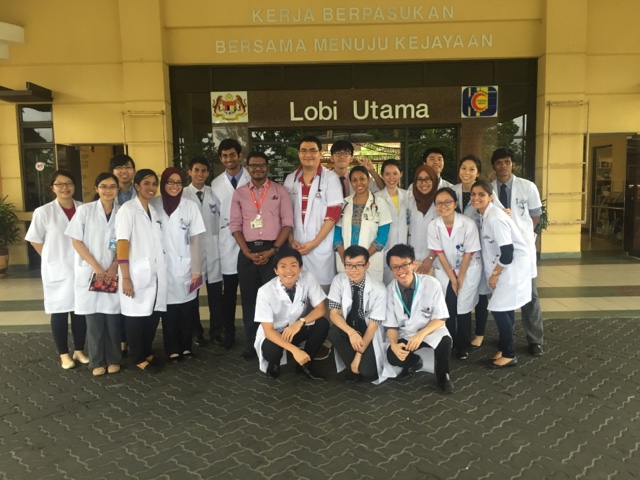 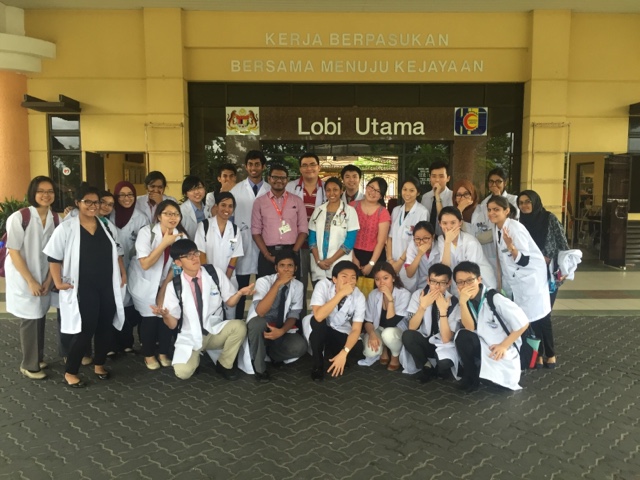 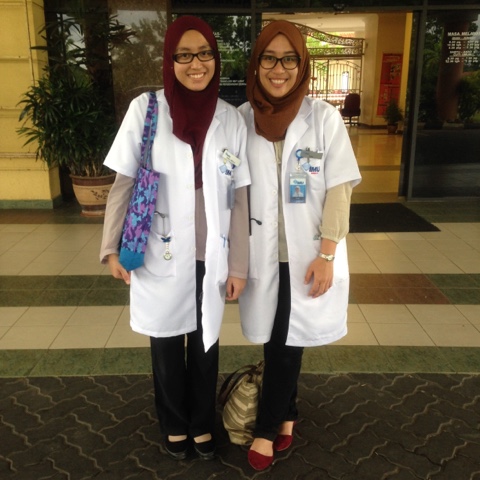 It was a great experience with wonderful people. I'm so gonna miss it. Thank you Jempol!