Recently, train fares have been increased included LRT, monorail and ERL, and ever since then, a lot of people seemed to express their dissatisfaction as those public transports are used to travel from one place to another place, not only just to shop and hang out with friends, but also to work and do daily errands. I never really concerned about this situation before as it has nothing to do with me because there's neither train nor road toll in Melaka, but this issue started to alarm me 2 days ago, when using the LRT and ERL has become a routine. Bila diri sendiri yang kena baru nak ambil kisah ish ish ish.

I'm having my posting in HKL, so everyday I have to take the LRT from Sri Petaling, then change to monorail either in Hang Tuah or Titiwangsa, and straight to Chow Kit as it is the nearest train station from HKL. Itu pun I have to walk about 1.9km because O&G (Wad bersalin) building is the furthest away cis haha boleh kurus! Previously the train fare was RM3.10 one way and basically each day I only had to spend RM6.20 for transportation (yang lain jalan kaki okay *tangan di bahu mata ke atas*), but after they increased the fare, it becomes RM9.20, which is an additional of RM3 per day. My posting is gonna be in 3 weeks time. The previous total expense for transportation was RM6.20 x 15 = RM93, but now it becomes RM138! It's a huge amount. Pity those who have to travel from one end to the other end, especially people who use public transport everyday to save money.

I already topped up my RapidKL card last Monday and I expected it should be enough for this whole week, but since they just increased the fare, I had to buy a one-way token from Chow Kit to TBS just now because my card can't be used as the amount was not sufficient for me to do so. Chow Kit to TBS is 3 stations lesser than Chow Kit to Sri Petaling and I assumed the price should be lesser as well, but guess what? The price is actually more; RM4.90! I was a lil bit confused because before this whatever method you used to pay, the price would still be the same, so I asked the guy who sat inside the counter. He told me that there's a discount using the RapidKL card. Hmm boleh pula macam tu. So if you use LRT or monorail frequently, especially those who use them as a daily routine, I suggest you to either use RapidKL card or Touch 'n Go. Here are the latest CASH & CASHLESS FARES.

Selamat tengok! Hehehe jk. If you wanna see them in a larger view, just click on the photos. 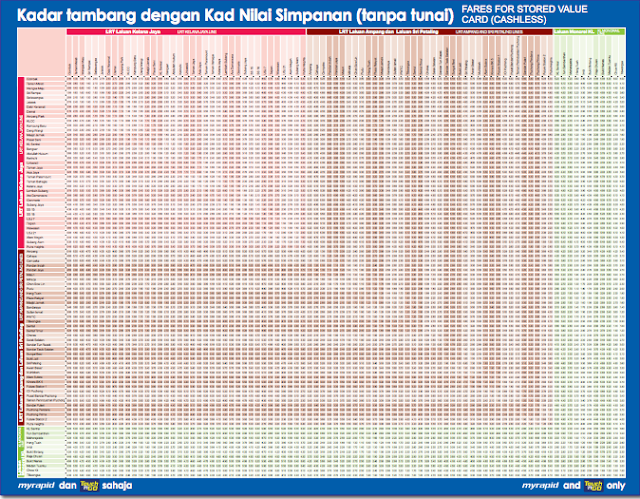 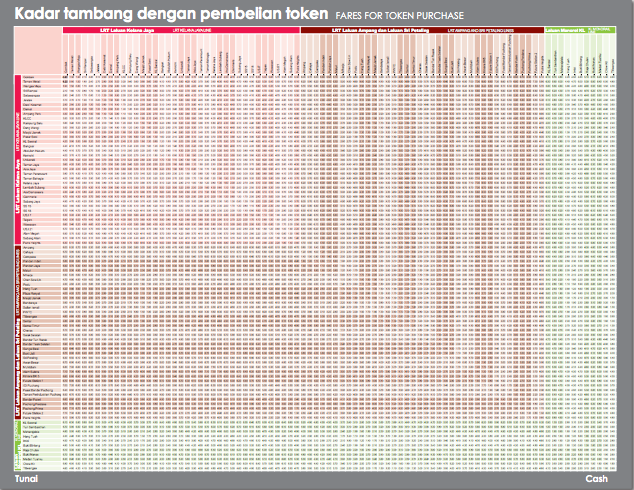 To be honest, I'm kinda frustrated with this matter. Imagine a single mother with 3 kids who travel anywhere using the LRT because she couldn't afford to buy a car, and a motorcycle can't bring 4 people at the same time, and what would happen to her after this? She has to work harder? She has to leave her kids at home unguided, instead of bringing all of them together? I wonder what were they thinking when they increased the prices and fares. Makin hari makin terasa, but there's no positive outcome yet.

I'm neither a supporter, nor an opponent.
I'm just a citizen who hopes better things for us to have benefits.