The lights went off and everything turned dark. Adrenaline surged. I thought I had become blind, or dead. I screamed, calling my mother, "Ibuuuuu, kita tak nampak." One chance to confirm it. I flipped the curtain and saw there was moonlight outside, and at the same time ayah opened my door with a torchlight in his right hand. I felt relief. I was neither blind nor dead. It turned out that my housing area had gone blackout. Ceh, penat je over panic macam dalam drama haha.

Anyway, as most of my study week break I spend at home and I don't have any other things I do or places I go, today I'm gonna tell you guys what is my study week routine. Yeayyyy.

The main thing I do is of course, studying.

The reason why I choose to have my sweet time at home is because there's no one in Vista as they are having their Christmas holiday and I don't have to think what to eat, what to buy and how to survive the day. Plus, I can save my money for something else.

I prefer studying in my bedroom instead of my study room downstairs because I can just straight away lie down whenever I feel sleepy haha. Do you wanna see my study place? 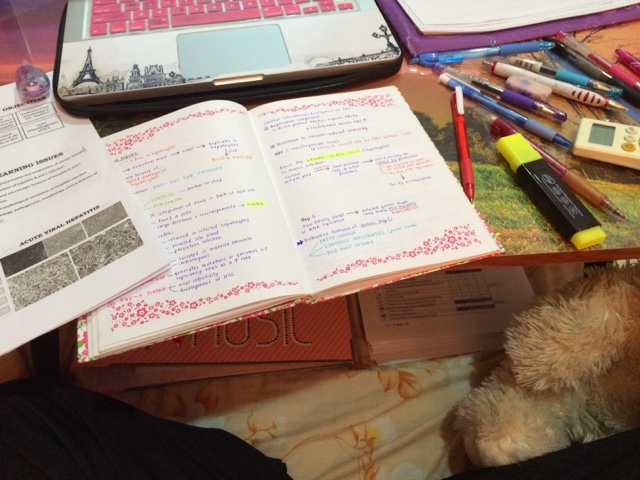 I put a small table on my bed, so that I have the right posture when studying. Takde lah sakit belakang compare to if meniarap lama lama. Sometimes, when my legs start to feel numb, I change my posture from sitting upright with kaki 'bersila' to leaning on 4 pillows piled on each other with kaki melunjur.

Nowadays, I can't study non-stop for a couple of hours like when I was in high school. Once in a while, I would stop studying and so-called 'get a life' by playing games. Not a video game, which you have the box and controllers. Just some simple games on my phone such as Neko Atsume, Piano Tiles 2 and 2048. Those are the only games I have in my phone actually hahaha. When playing games becomes a boring thing to do, I would log on to my Facebook and watch cooking videos!

I wonder if this kind of study habit is considered as a sedentary lifestyle hmmm I hope not. Suddenly, it reminds me of my first problem based learning (PBL) case discussion about a boy who had a sedentary lifestyle, spending hours sitting and binging on junk food, and eventually became obese. To not feel guilty, I spend my 5-10 mins doing some light exercises. I'm planning to reduce some weight, so that I can eat more in the future. I had a hard time thinking on what shall I do until I found Kak Farrah's post about 'My 20kgs Target'. Maybe I should try it. Mana lah tahu berjaya turun hehe nak turun 5kg if can :p

My most fav break time is of course during lunch or dinner when I can spend my time watching Totally Spies, while eating without any guilt! Hehe. I spend my days and nights in the bedroom. I only go out when I wanna eat, or if otak tepu sangat then I'd watch the television with my Ibu and brother. (Ardilla tipu sikit. Sebenarnya time tak boring pun kekadang dia keluar pi borak dengan Ibu, kacau Aiman and tengok tv membuang masa haha).

I didn't expect this post to be this long and I still have a lot of things to tell you guys! Maybe I shall make this post as Part 1 and continue with Part 2 later. I have some quick tips and easy way on something for you guys! You might need them hehe, so stay tuned for part 2!

Before I end this post, I have something to ask. Does anyone of you know how to stay focused without being procrastinate T.T I really have trouble with procrastination. Whenever I start checking my phone, I can't stop playing with it until I realise I've spent too much time procrastinating when I'm supposed to study. Tsk tsk. Okay nak sambung study *campak phone and laptop jauh jauh*.